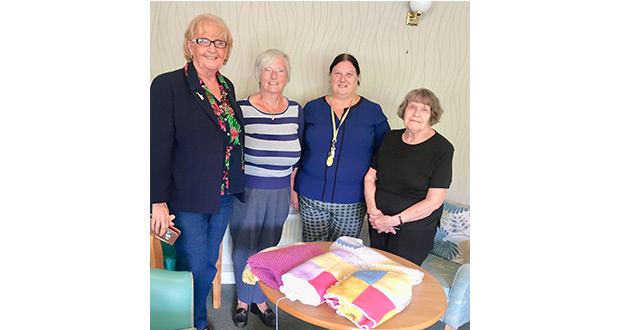 A CLOSE knit group of tenants from Port Glasgow have been helping to improve the lives of older people in their community by putting their stitching skills to good use.

Tenants from Bield’s Crosshill Gardens have been creating a selection of knitted and crocheted blankets for hospital boxes provided by Compassionate Inverclyde.

The Back Home Boxes, which are given to older people leaving Inverclyde Royal Hospital, include essential items such as bread, teabags and biscuits, in addition to the lovingly crafted blankets and ‘Get Well Soon’ cards designed by children from local primary schools.

More than 30 boxes are then dished out every week by volunteers from Compassionate Inverclyde from a dedicated room in the hospital.

Michele McKinnon, Retirement Housing Manager at Bield’s Crosshill Gardens, said: “The boxes make such a difference to elderly people being discharged from hospital – especially those who live alone.

“Our Bield tenants are regularly in and out of hospital, so having essential food items on hand for when they get home can be a godsend.

“Although blankets were always included in the boxes, our tenant Joan Jenkins – who received a box when she was discharged from hospital in 2017 – felt that Crosshill could contribute by setting up a knitting bee.”

Running once a week, the knitting bee is currently supported by Bield volunteers Anne McLaughlin and Liz Morrison – who started the group just over a year ago.

Michele added: “In the beginning, not many of the tenants could actually knit but Joan encouraged them to knit squares and over time they were stitched together to form the blankets.

“We now have a growing group who love taking part as it allows them to socialise, keep busy and create something that is going to really make a difference to the life of an older person.”

Crosshill Gardens in Port Glasgow is a Bield development for those aged 60 and over who want to be able to retain their independence while having help on hand when needed.