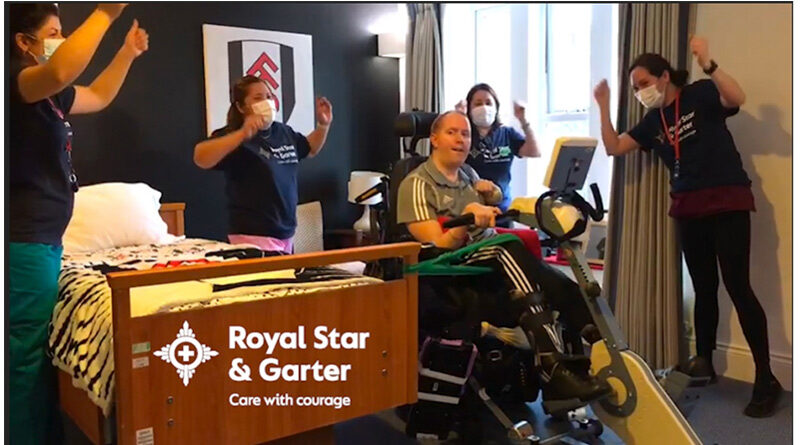 Rifleman Stephen Vause, who was left severely disabled by a bomb blast in Iraq, has been shortlisted for a prestigious award recognising the Armed Forces community.

Stephen has been named a finalist in the Inspiration category of the Soldiering On Awards, in recognition of his remarkable fundraising endeavours. The winner will be chosen through a public vote in August, and then announced on 28 October.

The 33-year-old lives at Royal Star & Garter in Surbiton. The Home provides loving, compassionate care to veterans and their partners living with disability or dementia.

Despite his injuries leaving him in a wheelchair and using a tablet to support communication, Stephen undertook a gruelling 60-mile virtual London to Brighton cycle ride from his Royal Star & Garter room during the second lockdown.

With the help of staff at the Upper Brighton Road care home, he completed the challenge on his adapted static bike in six weeks, raising more than £5,000 for Help for Heroes.

His fundraising efforts began on Christmas Eve, and were backed by celebrities such as Lord Sugar and Jeremy Vine. The final moments of his exploits on 1 February were captured on film by Royal Star & Garter staff and shared by Lorraine Kelly on her ITV breakfast show.

Stephen said: “I don’t know what to say but thanks! I hope that the money I raised can help other veterans like me.”

His mum Jessica, who lives in New Malden, was thrilled for her son. She said: “I am really proud of Stephen. It is typical of him to turn the challenges of living in a care home during the Covid pandemic into a positive which helps him continue to fight his injury while helping and motivating others who may be less fortunate. All his family and friends find him totally inspirational.”

Stephen was just 19 and on his first tour in Iraq, serving with the 4th Battalion The Rifles, when a mortar explosion near Basra left him fighting for his life. Speaking after he finished his London to Brighton fundraiser, Stephen said: “Help for Heroes have helped me a great deal and I wanted to do something for them.”

Votes for Stephen can be cast between 9-22 August. More details will be available closer to the time.