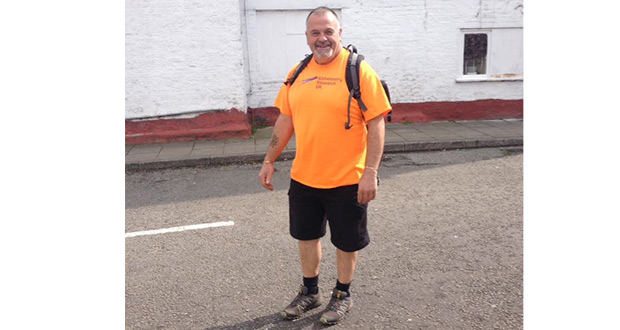 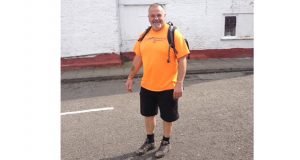 For Steve Boryszczuk, trekking into Bhutan across the Himalayas for Alzheimer’s Research UK will not only be a physical feat to raise funds for vital dementia research, but a challenge of great significance to him emotionally.

Steve, 51, lost his wife Michelle at the age of just 43 to early-onset Alzheimer’s disease in 2013, and ever since has been ticking items off her bucket list.

The trek to Bhutan, a Buddhist kingdom in Asia on the Himalayas’ eastern edge, is the last item on that list.

For Steve it was love at first sight when the pair met at a darts night at their local pub when they were just 15 and 17, when Michelle’s parents ran a darts team. When Michelle turned 16 the pair got married, and they went on to have two sons shortly after.

As they started a family so young, the pair planned to travel the world once their two children were both old enough to fly the nest, with Michelle making detailed plans of their future adventure.

Devastatingly, she died from dementia before she could fulfill her dream, after being diagnosed at just 38 as one of the youngest people in the country to have the condition.

Since her death, Steve has made it his mission both to raise awareness of dementia in young people and for much-needed research, and to tick off every item on his wife’s bucket list for her – all of which include long treks because Michelle loved walking. She sadly lost the ability to walk at 39.

Steve has taken on the Great Wall of China, the Yorkshire Three Peaks, the Inca Trail in Peru, walked all 16 London Bridges, the Isle of Wight’s 65-mile coastal path, Hadrian’s Wall, Costa Rica coast to coast, including climbing the country’s highest volcano, and finally he will be walking to Bhutan.

Steve, who lives in Market Rasen, Lincolnshire, said: “In every place I go on Michelle’s bucket list I get permission to lay a little brass plaque dedicated to her in her memory. When she died I kept some of her hair, and everywhere I go I leave some so she gets to be in all those places she longed to visit.

“In Costa Rica I left a plaque behind a waterfall in the rainforest, in Peru on a stone at over 10,000ft above sea level, and this will be my final one to leave. I got emotional doing every single one of these trips without her. Now it’s coming to an end I’m going to be even more emotional. It signifies a time for me to move on, but I’ll never let her memory die. I’ll keep fighting for more awareness, and for the need for more research into this devastating disease.

“Michelle worked in a home for disadvantaged children, she loved acting, painting, gardening and walking and she was an incredible mum to our two sons. When I first saw her, I just knew she was the one for me, it was love at first sight. I miss her every day, and I just hope my fundraising for Alzheimer’s Research UK can help us get one step closer to finding a cure so no one has to go through what we went through as a family.”

After Michelle’s dad died at 46 from the disease, and her grandmother at 45, Michelle took a test at the age of 28 to find out if she had a rare, inherited gene which caused familial Alzheimer’s in her family. Less than one percent of all Alzheimer’s cases are thought to be familial, and Michelle stood a 50 percent chance of inheriting the faulty gene from her dad. The test came back positive.

Michelle began showing symptoms when she was 36, after Steve found her hiding the post ‘in case someone stole it’, and she was found wandering around lost and confused by a neighbour.

Steve gave up his job as a lorry driver to look after her full time, but became exhausted physically and mentally after looking after her for four years, so she went into a care home.

In 2012 Steve found a secret diary written by Michelle, which chronicled how she wanted to be cared for as the disease developed. Steve was offered comfort from this in knowing he’d done the things she’d wanted.

In May 2013 he held his wife’s hand for eight days straight up until she sadly died from the disease.

Steve said: “It was absolutely devastating for me, it still is, I was distraught. I’ll miss her for the rest of my life, she was my whole world. I just hope she’d be proud of everything I’m doing for her in her memory. I’m going to make the most of every wonderful second on that walk, because I know she would have done.”

Steve and Michelle’s two sons, Richard, 31, and Graham, 29, have both decided not to get a test to find out if they too possess the familial Alzheimer’s gene.

“Michelle’s story is a perfect challenge to the prevailing misconception that dementia is just forgetfulness in old age. The condition is caused by brain diseases which turn lives and families upside down, and which no one currently survives.

“Alzheimer’s Research UK is leading the fightback to bring an end to the fear, harm and heartbreak of dementia through world-class research projects across the UK and beyond. Our scientists’ pioneering work is only possible because of our dedicated supporters like Steve.”

To donate to Steve’s fundraising page, go to www.justgiving.com/fundraising/steve-boryszczuk5

Anyone wishing, like Steve, to take on an international adventure for Alzheimer’s Research UK can join the charity’s first ever overseas trek in beautiful Guatemala where they will climb up five active volcanoes. Go to www.alzheimersresearchuk.org/Guatemala for more information.