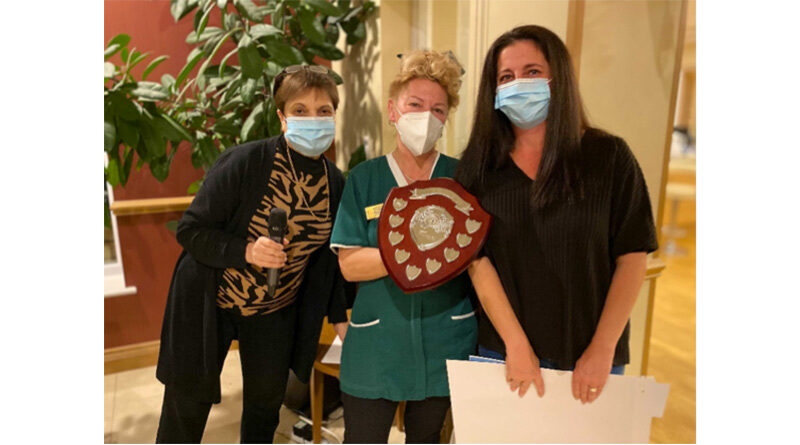 A Hitchin care home has rewarded two of its carers for going above the call of duty during the COVID-19 pandemic at its annual Carer of the Year awards.

During the ceremony at Foxholes Care Home, Gillian Lavender and Stella Burton were presented with the special Dorothy Lefford shield, which serves to recognise and commend the hard work of the home’s valiant and passionate team of carers.

Now in its fourth year, the residential home’s awards evening began with each person from every team, including care, catering, maintenance, activities, management, front of house, and housekeeping, being commended for their efforts during what’s been a difficult year for the care industry. The ceremony was then concluded with a firework display in Foxholes’ grounds for the residents and staff to enjoy.

Upon receiving the award, Gillian said: “When I heard my name announced I was completely stunned, it was so totally unexpected. It was amazing to hear Stella’s name mentioned too as we both started working at Foxholes within two weeks of each other. To go to work every day doing something you’re passionate about and love doing doesn’t feel like work. The residents at Foxholes are all like extended family members, and that in itself is a huge reward.”

Stella added: “I was surprised and very overwhelmed to receive the award. It’s an honour to be recognised as part of the team. I hadn’t worked in care before coming to Foxholes and I don’t believe I could have asked for a better place. I feel supported by the management and love coming to work to see the residents and be a part of their lives. If I can help make a positive difference to someone’s life, then I feel fulfilled and that is my drive every day.”

The special accolade, which was awarded to Gillian and Stella by Usha Gandecha, Foxholes’ home manager, is named after former resident, Dorothy, whose son wanted to leave a legacy in her name after she passed away four years ago. To thank the staff for the care they provided his mother, he donated the shield, which is engraved with the names of each years’ winners.

Usha said: “In many ways, this has been the most challenging year we have ever faced, and we simply would not have got through it without the exceptional team of staff that we have. Both Gillian and Stella are wonderful members of our care team who go above and beyond for our residents. They have had to make sacrifices but have done so without complaint. They’ve built strong, meaningful relationships with staff and residents alike, and not only do their jobs with smiles on their faces, but keep others smiling too. I can honestly say that ever since both Stella and Gillian started working here, they have been nothing but an asset to the team and they are very deserving of the award.”