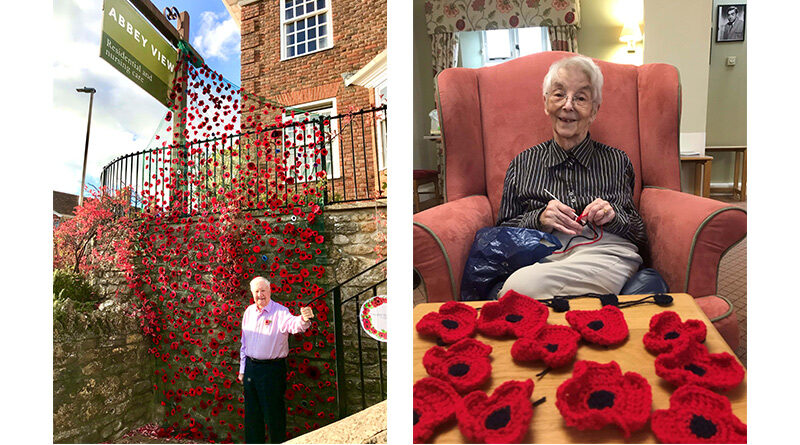 Residents of Colten Care homes across the south have handcrafted hundreds of model poppies to put on display for Remembrance season.

An appeal for friends and families to lend support resulted in more than 900 wool and felt poppies forming a prominent cascade outside Abbey View in Sherborne, a landmark easily visible to passers-by.

Viewing the sea of red, 90-year-old Abbey View resident Captain Gerald Blackburn spoke of his pride in helping with the display.

“I was particularly touched while watching the poppy display grow as we have worked on it over the last few weeks,” said Gerald, who joined the Merchant Navy aged 16 in 1946 and quickly rose to gain a Masters Certificate. “It’s a very special thing we have done and deeply touching to know that even during Covid times we are able to remember the lives of the fallen. I’m very proud of the display.”

Among the contributions from the community were felt poppies made by Sherborne Beaver Scouts and nine poppies knitted by eight-year-old Grace Turner and her family.

In an accompanying letter, Grace wrote: “Dear Abbey View, here are some poppies for your Remembrance day display, knitted by myself, my mummy and my grandma. Best wishes to you all.”

Diane Duffield, Companionship Team Leader at Abbey View, said: “Remembrance is always an important occasion for us as so many of our residents have childhood memories of the war and its aftermath

“Preparing our display was a lovely project to be part of. Our residents really enjoy their arts and crafts and the poppy making activity certainly prompted many conversations and recollections.”

Complementing the displays of poppies, Colten Care homes have also been fundraising for the main annual poppy appeal run by the Royal British Legion.