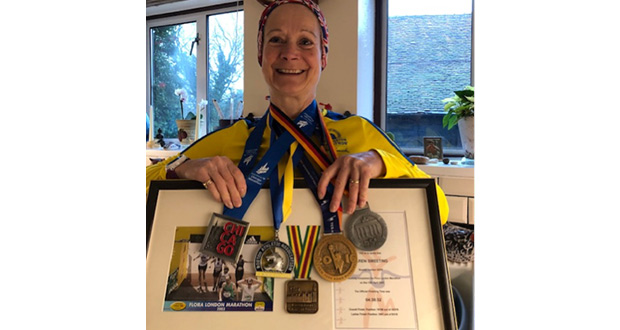 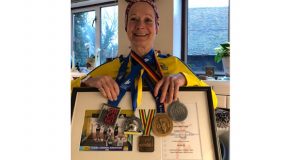 A member of staff at The Royal Star & Garter Home in High Wycombe has joined an elite group of runners after completing the Tokyo Marathon.

Hospitality Services Manager Karen Sweeting was one of 38,000 runners taking part in the event in the Japanese capital on 3 March, finishing the 26.2-mile course in 4hrs 46mins.

And in doing so, she received the Six Star Finisher Medal, given to runners who have completed all six World Marathon Majors – London, New York, Chicago, Boston, Berlin and Tokyo.

It is regarded as one of the most exclusive race prizes in running with less than 5,000 amateur runners listed in the world as having completed the full set.

Karen, who lives in Chesham, Buckinghamshire, said: “It was a wet and cold marathon and the second half was unpleasant as I pulled a muscle. But I got there in the end and I’m so proud to have accomplished this goal. It’s overwhelming.”

Her first marathon was London in 2002 and Karen has now run a total of 20 road marathons. Her best time is 3hrs 56mins in Amsterdam 2015.

She has also tested her endurance further by taking part in an off-road marathon and three ultra-marathons, which were also off-road and each a distance of around 33 miles.

She said: “Running keeps me fit and healthy and helps me stay focused. There are so many times when I’m training or in a marathon and it’s tough and I wonder why I’m doing this to myself? But that makes it all the sweeter when I cross the finishing line – I always burst into tears.”

Karen says there are several qualities required in endurance running which she will bring to her position at The Royal Star & Garter Homes. She said: “You have to be determined to run marathons, you have to stick to your schedule and be passionate about it, and I think these qualities follow me into my life. I am certainly determined to succeed in this job. I take out all my frustrations when I’m running so I’m calm when at work. I’m single-minded and passionate about what I do.”

Later this year Karen will be raising money for The Star & Garter Homes when she takes part in the Royal Parks Half Marathon.