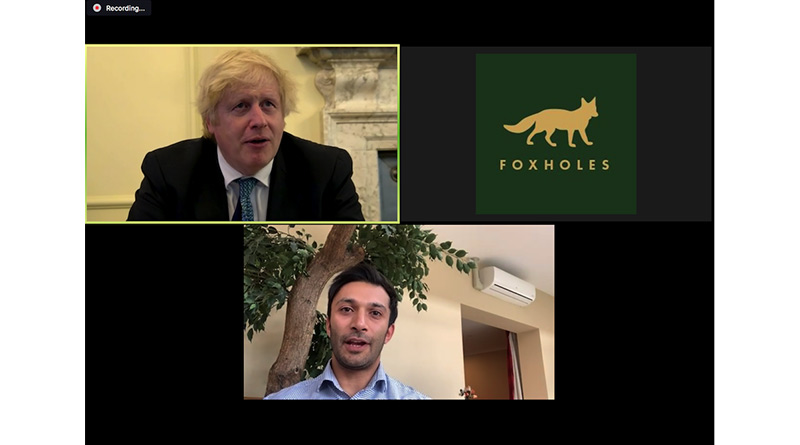 Staff at a Hertfordshire care home were delighted to receive a video call from the Prime Minister, where he personally thanked them for their efforts in protecting residents during the pandemic.

Wanting to personally commend frontline workers for their “unbelievably” hard work in these “incredibly tough times”, the Prime Minister joined staff at Foxholes Care Home, near Hitchin, via a Zoom video call.

Directly addressing staff at the family-run residential home, the Prime Minister said: “Thank you for everything you’ve been doing, I know it’s been an incredibly tough time. The work you have been doing has been of huge importance to this country. We were so worried about the epidemic in care homes, but you’ve managed to come through it, and you’ve got all your residents testing negative, and that’s a fantastic achievement.”

As has been the case for many of the 18,000 care homes across the UK, Foxholes has had to combat the virus, but by following the government’s guidance and maintaining a stable supply of PPE, all of its residents are now testing negative.

The Prime Minister also greeted residents, one of whom Shirley Saunders, had previously contracted coronavirus but has now made a full recovery. The Prime Minister congratulated Shirley on her recovery and joked that she was “a lot tougher” than he is.

Neil Gandecha, Estate Manager at Foxholes Care Home, said: “It was a pleasure to virtually welcome the Prime Minister into our home. He was very interested in hearing how we’ve been coping during the pandemic, and appeared genuinely thankful for the care we’re providing, having been someone who has experienced first-hand what the virus is like.”

Staff at Foxholes described the experience as “surreal” and “inspiring” to receive personal recognition for their work. The Prime Minister even said he would drop by the home for a cup of tea next time he is in the area once lockdown has lifted, after sharing that he has visited Hitchin numerous times.

Usha Gandecha, Home Manager at Foxholes, said: “It was great to speak with the Prime Minister and share our experiences of the pandemic with him. I also wanted him to know about the amazing support we’ve had from our District Nurse teams, who have stood by us 24/7. All the visiting paramedics have gone above and beyond too.”

Number 10 Downing Street arranged the call having heard of the positive stories to come from the home during the crisis, which were relayed to them by the Department of Health and Social Care. One particular story which caught their interest was that of 83-year-old resident Alfred Lewis having the Grand National brought to him following the cancellation of the world-famous steeplechase. The home recreated the atmosphere of Aintree and aired the virtual event for Alfred, who was due to attend fist first-ever Grand National before the virus outbreak.

To keep up the morale during the crisis, Foxholes has also organised socially distanced musical performances and set up Facebook Portals around the home to ensure residents can interact with family and friends regularly in real-time.

Neil concluded: “It was very humbling to hear that the Prime Minister wanted to personally thank us for our efforts against coronavirus, and the call was something we certainly won’t forget in a hurry. None of our residents had ever spoken to a Prime Minister before. To receive such recognition for the work our staff are doing to protect our residents is incredible and it’s proven to be a real morale booster for everyone at the home.”