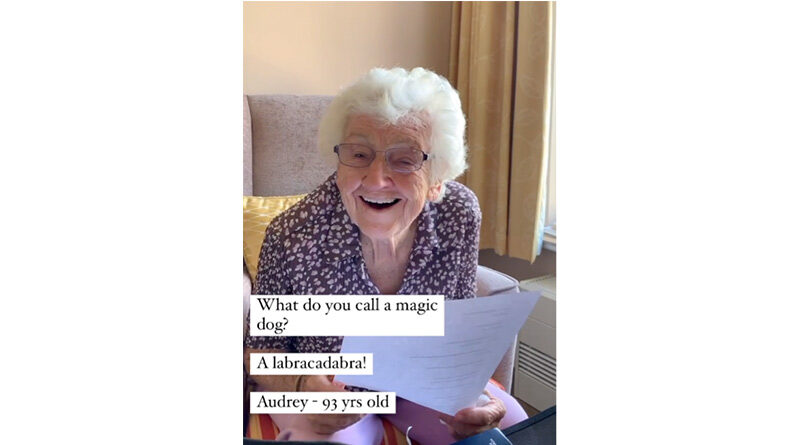 Laughs were shared across a Hertfordshire care home as it hosted its very own Comedy Club on August 16 to mark National Joke Day and provide some light-hearted fun for residents and staff.

Chuckles, giggles and full-on roars of laughter filled the walls of Foxholes Care Home, near Hitchin, during its inaugural comedy club event, which was hailed as a great success from all involved.

The playful scheme aimed to promote friendship, togetherness and positive wellbeing, while providing residents and staff with a chance to enjoy some light-hearted fun following a challenging 18-months due to the COVID-19 crisis.

Foxholes, a thriving and active care community that promotes inclusivity – which is evident in its array of clubs and events – is always on the lookout to trial new initiatives that enhance resident wellbeing.

Those involved in some of the one-line gags included 90-year-old Una Bracey, who opted for the cheeky classic, “Why did the tomato blush? Because it saw the salad dressing.” While 91-year-old Jean Jacobs went for the festive favourite, “What do you get when you cross a snowman and a vampire? Frostbite!”

Not all jokes landed, however, with 82-year-old Tony Beauchamp not impressed when told, “Two cats had a swimming race. One cat is called 1,2,3 and the other is called un, deux, trois. Which cat won? 1,2,3 because un, deux, trois, quatre, cinq.” “That’s not even funny”, he chuckled.

Una said: “I particularly enjoyed the one-line joke session. It was a bit silly but hilarious at the same time. It’s important to let yourself go and have a laugh because it releases things you can’t explain, which makes you feel good.”

Neil Gandecha, estate manager at Foxholes Care Home, said: “We’re always open to new ideas on ways we can improve our residents’ quality of life and following numerous requests, we decided to trial a comedy club”.

“It was our way of providing residents with an opportunity to share a few laughs and form new friendships. We wanted to spread some summer cheer to mark National Joke Day and we achieved that, through the good jokes and bad!”