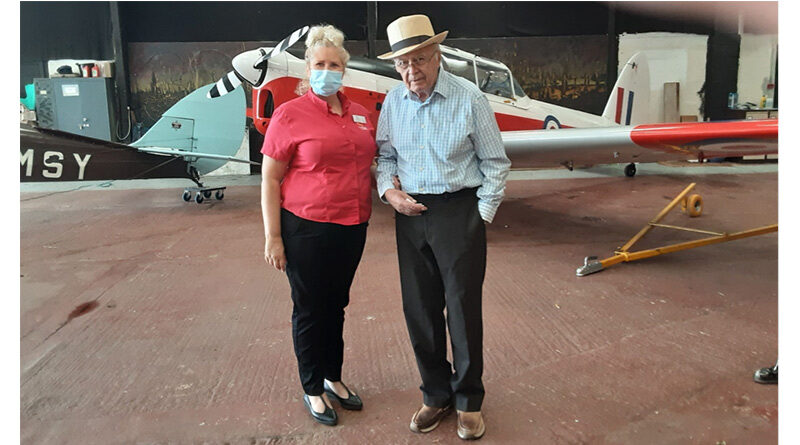 Fond memories of life in the air, including hundreds of royal flights, were rekindled as a retired RAF pilot enjoyed a ‘spectacular’ day out at Dorset’s Compton Abbas Airfield.

Captain Michael Harrington was on a trip from Colten Care’s Poundbury care home Castle View when he amazed his hosts by showing them logbooks from throughout his career.

They document in detail his first flying school experiences right up to his years of service transporting members of the royal family around the UK and overseas.

Altogether he completed 417 royal legs and nine full royal tours, with passengers including Her Majesty the Queen, the Duke of Edinburgh, the Prince and Princess of Wales, and Princes William and Harry.

As well as talking through entries in the logbooks with the flight controller and other managers at Compton Abbas, Michael was invited into the hangar to view a vintage Chipmunk, a plane he flew regularly in his early years of RAF service.

From the 1950s to the 1970s the Chipmunk, or ‘Chippy’ as it was affectionately known, was the RAF’s primary training plane for air cadets.

The plane at Compton Abbas began its service in Edinburgh in 1952 and was put into storage when it finished its RAF life. It was later civilianised and rebuilt at the Duxford airfield in Cambridge in 2000.

Another compelling draw for Michael was a yellow 1940s Boeing Stearman biplane, complete with open cockpit.

The Stearman was initially a training aircraft for the US Army Air Force, US Navy and Royal Canadian Air Force.

After World War II, thousands of surplus Stearmans were sold on the civilian market becoming popular as display aircraft at air shows and in agriculture as aerial cropdusters.

An iconic movie image shows a Stearman cropduster chasing Cary Grant across a field in the 1959 Alfred Hitchcock spy thriller North by Northwest.

After his visit, Michael said: “I had a truly spectacular day. I loved spending time at the airfield and watching learner pilots taking to the sky.”

Castle View Companionship Team Leader Katja Williams, who accompanied Michael to Compton Abbas, said: “The flight controller and management were amazed that Michael held all of his logbooks. They really welcomed him and extended their gratitude to him for coming. And on our way home, Michael told me all about his favourite aircraft to master in the RAF, the Vulcan.”