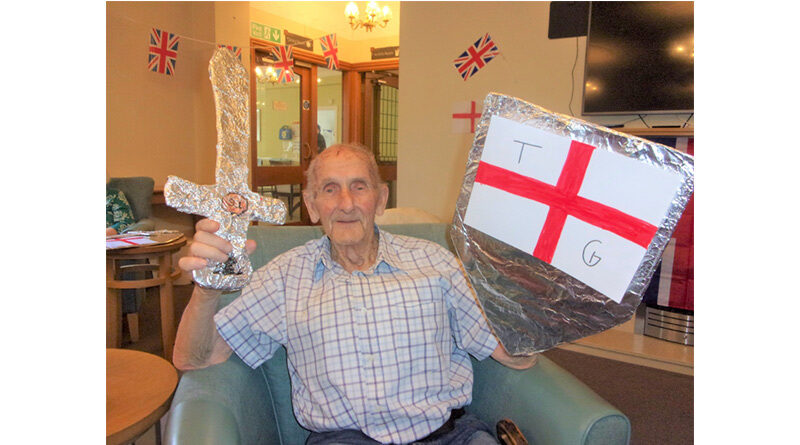 At Acorn Hollow Care Home in Lostock Gralam, Northwich, Residents enjoyed a garden party whilst indulging in a pie and a pint in celebration of St George’s Day. To mark the occasion, the local butchers kindly donated pies for the party and the local paper came to take photographs. The garden was beautifully decorated with bunting displaying the famous St George’s flag. Residents enjoyed sitting outside in the garden in the sunshine wearing fancy-dress hats and having a chat, whilst singing along to music and enjoying the atmosphere.

“The garden and decorations looked so good and it was clear that Residents thoroughly enjoyed the garden party.”

In Humberston, Clarendon Hall Care Home, celebrated St George’s Day with a party. Residents marked the day by getting creative in an arts and crafts session by making swords and shields from cardboard which were then decorated in tin foil. Residents also came equipped with paper and felt tip pens to draw a red cross which was laminated and displayed on the front of each shield to resemble St George’s flag, with Residents adding their initials to create their personalised coat of arms. Residents plan to put their creations proudly on display on their bedroom walls. Later in the day, Residents participated in an information session about the life of St George and the history of why we celebrate England’s national day, which the Residents found interesting. This was followed by patriotic music, including “Land of Hope and Glory” and “God Save The Queen” which Residents enjoyed singing and dancing along to. A delicious selection of cakes was served which displayed the St George’s flag and the drinks trolley came around so Residents could enjoy their favourite tipple.

“We discovered that St George didn’t actually slay a dragon, it was just symbolism. Everyone enjoyed singing along with the music and synchronised sword dancing!”

In celebration of St George’s Day, a Colleague at Brandon House Care Home in Coventry dressed up as a mystical knight and surprised Residents. The Colleague was dressed from head to toe as St George and made their way around the home, surprising Residents and giving them all a laugh. In addition, the Colleague educated Residents on St George and what he means to England. Residents were shocked to find out that St George was not English and that he was actually Turkish! Residents also discussed places that they have visited in England and what makes them proud to be English.

Residents at Ashgrove Care Home in Dudley celebrated all things British to mark St George’s Day. When asked who they thought the greatest Britons were, the usual names came up, including Stephen Hawking, Winston Churchill and Charles Dickens. One name that popped up was a local sporting legend, Duncan Edwards, who was sadly killed during the Munich Air Disaster, aged 21. Bobby Moore was also mentioned, as were Diana, Princess of Wales and The Queen. The list of suggestions was endless and Residents really enjoyed reminiscing about old times and discussing all things great about Britain.

Residents continued celebrating the day by dressing up, waving flags and enjoying a lovely drink of classic British beers and lagers. Residents also indulged in sampling some traditional British foods, such as fish and chips and an afternoon tea with classic scones, sandwiches and of course a nice cup of tea.