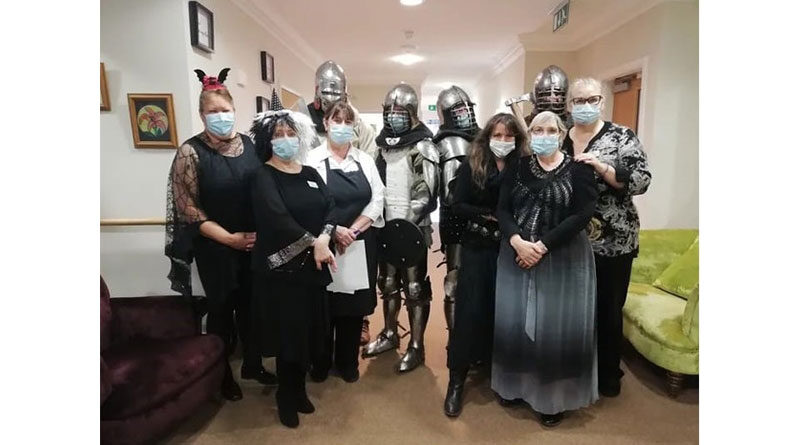 After their planned entertainment had to cancel, the knights in shining armour at White Company stepped up at short notice to save the day.

White Company are a local organisation and are the No.1 ranked team in Europe for full contact medieval sword fighting, holding two world championship belts.

When they were contacted by Gracewell of Maids Moreton, they were eager to come down and entertain the residents.

The day proved to be a huge success and was thoroughly enjoyed by all.

Dressed head-to-toe in armour, the knights put on an informative afternoon for residents and gave a detailed presentation on the evolution of armour and the names of various parts of the suit, such as greaves and sabatons. As well as this, they demonstrated how each part would have been used in battle, and why it was so important for knights at the time.

The highlight of this session for many was when they were shown a selection of weapons that would have been used in the era.

Enthralled by the sight of a knight close up, one resident said:

“I’ve only ever seen armour in museums, I have never seen anyone actually wear it!”

As the day progressed, the knights had one final surprise for residents for their Halloween Party.

After ‘slaying’ the witches, played by the Activities Team at the care home, the chivalrous knights visited every resident’s room.

Pledging to protect them, they proceeded to present a token red rose to the ladies and shake the hands of the gentlemen.

Reflecting on the fantastic alternative Halloween entertainment, Activities Co-ordinator at Gracewell of Maids Moreton, Karen Cunningham, said:  “The reaction from the residents was truly amazing. From wonderment to enlightenment, to having a flash back of youth, it was incredible. Many of them loved being wooed by a knight bowing before them with a rose or for the gentlemen reminiscing about their childhood playing in the woods.”

Tim Newson, son of one of the residents at the home, added:  “Spontaneity is part of what your fantastic raptors bring with magnificent grace. For mum lying in a room their presence transforms the room into a live arena where anything can happen. At Gracewell of Maids Moreton the team are excellent and give very positive input.”

Member of the White Company, David Dyczek, commented: “We loved the time we spent with the residents, we shared laughs, chats and a great atmosphere. I believe that we took more from that gift than we gave.”