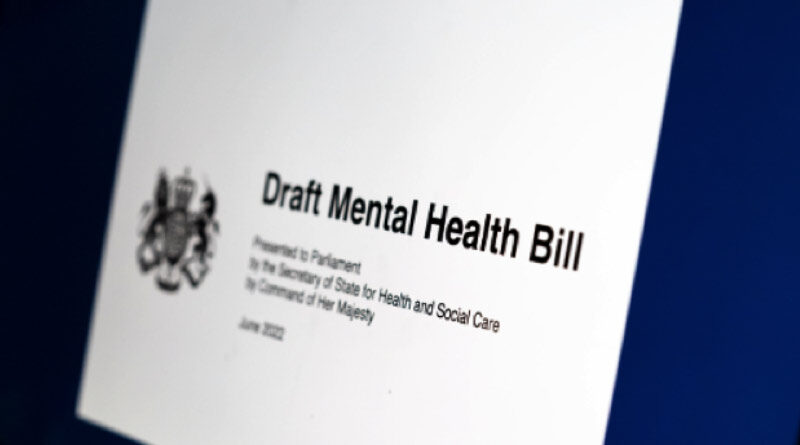 The Government’s draft Mental Health Bill must be strengthened to address rising numbers detained under current legislation and tackle unacceptable and inexcusable failures on racial inequalities, say MPs and Peers.

The Joint Committee’s detailed report is published today following extensive hearings to scrutinise the draft legislation. The Joint Committee, established in July 2022, has examined the extent to which the draft Bill would ensure fewer people were detained against their wishes, promote patient choice, address racial inequalities and end the inappropriate long-term detention of people with learning disabilities and autistic people under the Act.

The Committee supports reform of the 1983 Mental Health Act and the intentions behind the draft Bill. It says that the reform process should not end here and needs to continue beyond the draft Bill in the direction of more rights-led legislation that respects patient choice.

The Government is urged to publish a comprehensive implementation and workforce plan alongside the Bill with clear actions and milestones. There should be a statutory duty to report annually to Parliament on the progress against milestones, including the number of detentions, length of stay and progress on reducing racial and ethnic inequalities.

Chair of the Joint Committee on the draft Mental Health Bill Baroness Buscombe said: “We welcome the intention of the Government’s draft Bill to bring about long overdue mental health reform. We hope Ministers will accept our amendments which strengthen the Bill and deliver workable legislation. Ministers must now act swiftly to bring it before Parliament.

“To drive reform, we urge the creation of a new Mental Health Commissioner to monitor the implementation of the Bill and to speak up for patients, families and carers.

“We believe stronger measures are needed to bring about change, in particular to tackle racial disparity in the use of the Mental Health Act. The failure to date is unacceptable and inexcusable.

“The Government should strengthen its proposal on advanced choice and give patients a statutory right to request an advance choice document setting out their preferences for future care and treatment, thereby strengthening both patient choice and their voice.

“The existing shortfall in community care must also be addressed or these reforms risk being derailed, with worse outcomes for those that the Bill is intended to help.”

Key recommendations to Government include:
• Creation of a new statutory Mental Health Commissioner post
• The Principles underpinning the 2018 Review and respect for racial equality should be included in the Bill
• Health organisations should appoint a responsible person to collect and monitor data on detentions under the MHA, broken down by ethnicity, with annual figures published by Government, and to implement policies to reduce inequalities
• Community Treatment Orders are used disproportionately for black and ethnic minority patients and should be abolished for the majority of patients, except those involved in criminal proceedings or under sentence where their continued use should be reviewed
• Strengthened duties for Integrated Care Boards and Local Authorities to ensure adequate supply of community services for people with learning disabilities and autistic people to avoid long-term detention
• Patients detained or previously detained under the MHA should have a statutory right to request an advance choice document is drawn up

Responding to the report, Sarah Hughes, Chief Executive of Mind, said:
“For decades, people sectioned under the Mental Health Act 1983 have been at the back of the queue when it comes to effective planning and funding. In recent months, we’ve seen a wave of whistleblowing stories raising the alarm on alleged abuse and neglect of people living on mental health wards around the country. These accounts demonstrate the urgent need for wholesale reform to the Mental Health Act and crisis care settings.

“Given these appalling reports, we welcome the Committee’s proposal to establish a new Mental Health Commissioner role. If properly funded and truly independent, the Commissioner could act as a powerful advocate for patients’ rights. Mind has been calling for a national statutory inquiry into systemic failings of inpatient mental health services since September, and a dedicated Commissioner should steer any future inquiry to make sure the voices of people with lived experience are amplified.

“We are glad to see amendments focused on boosting patient choice, but we’d like these to go a step further and introduce an enshrined right to assessment and treatment. All too often, people are turned away or unable to access preventative care, only to end up in the system later on via more dangerous or uncomfortable routes.

“This Bill alone cannot solve the many issues in mental health crisis care, so we echo the Committee in saying these reforms must go hand-in-hand with a dedicated commitment to address the huge gaps in community-based and preventative treatment. Without adequate funding of community provision, the Bill risks failing the very same people and groups it originally set out to help.

“People with mental health problems deserve considered and properly implemented legislation, which at the very least keeps them safe, but also prioritises their wants and needs when it comes to treatment and care. Mind looks forward to working closely with the UK government to further strengthen the draft Bill and help realise its ambitions for people with mental health problems. We thank the Committee for its time and attention in evidence sessions.”