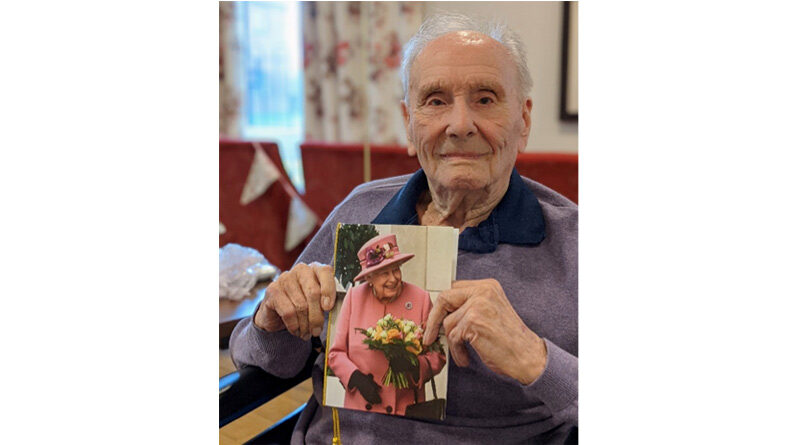 To celebrate such a milestone in lockdown, the team at the care home made sure it was a special day for Geoffrey. There was a tea party and his son, Tony, was able to join in the celebrations too. There was a special birthday cake and buffet with all his friends at Brendoncare Otterbourne Hill, and lots of bunting and balloons to brighten up the day.

Geoffrey said, “It was a lovely day and I really enjoyed sharing it with my son, Tony, and all the staff and my friends at Otterbourne Hill.”

Geoffrey’s son, Tony Large, commented, “I was so glad the Covid lockdown eased enough for me to visit Dad again, and seeing Dad on his 100th Birthday, having missed his 99th, was wonderful. The Otterbourne Hill staff made it a special day for us, and a lovely cake in the shape of an aeroplane too.”

Geoffrey was born at home in Thornton Heath, Surrey on 15 March 1921.  One of his early and vivid memories was watching his father, a salesman, travelling by horse and carriage to the shops all over London.

He joined the RAF in 1941 and completed his flying training in Canada in July 1942, learning on single engine Tiger Moths, before progressing to twin engine Airspeed Oxfords.

After receiving his wings he was posted to Dorval Airport, Montreal, HQ of the then RAF Ferry Command, for transatlantic ferrying duties. He delivered new American aircraft to the UK, via the Ascension Island to West Africa and the Middle East. He was appointed as a Pilot Officer in August 1943.  He continued flying across the South Atlantic delivering a variety of twin engine American aircraft, from the easy to fly Lockheed Hudson to the difficult Martin B26 Marauder, before qualifying on multi engine aircraft and flying the Consolidated B24 Liberator heavy bomber.

At the end of the War he was posted to Burma and India, before flying Prisoners of War back to the UK from all over Europe in twin engine Douglas DC3 Dakotas.

The two recent highlights were invitations from Blind Veterans UK to attend The Not Forgotten Association’s annual Garden Party at Buckingham Palace in 2017, and a trip to Farnborough Airport. By coincidence, the Red Arrows were at assembled at Farnborough Airport ready for a flying display. When they heard that Geoffrey was ex RAF, the pilots all came to meet him, and he was thrilled to have his photo taken with them.