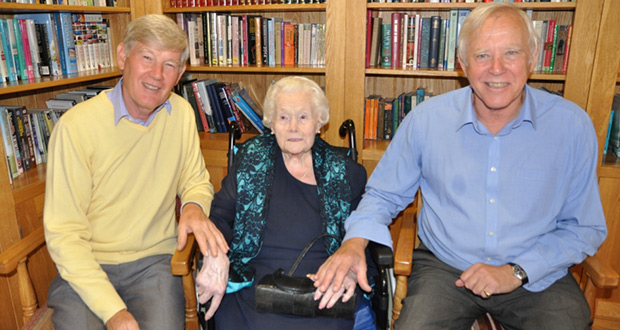 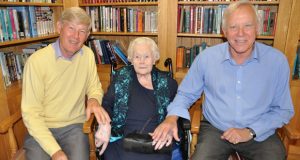 Admirable fundraiser Florence Candlish bowed out of 78 years fundraising for the RNLI – on her 100th birthday.

Florence, a resident at Colten Care’s Braemar Lodge care home in Salisbury, started volunteering for the Royal National Lifeboat Institution in Birmingham in 1939.

An accomplished catering specialist, she travelled the country during her career, setting up industrial kitchens. But she always managed to find time for the RNLI.

After moving to London and having two sons, Florence helped collect on Flag Days for the Kensington branch of the charity.

And when she moved to Salisbury in 1967 she soon joined the city’s own RNLI branch, occupying all of its elected posts, including Chairman and Treasurer, at some point.

Florence was born in Southsea in Hampshire on June 28, 1917, and her father Walter Hiscox was in the Royal Navy based in Portsmouth. However her devotion to the RNLI did not stem from her own love of the sea.

On the contrary, she is not keen on boats, nor the sea, because she can’t swim.

One of her two sons, Graham Candlish, 69, said: “Since joining the Salisbury Branch in 1969, mother has been a dedicated and enthusiastic member of the committee and she only gave up standing outside supermarkets with a boat shaped collecting tin a few years ago.”

Widowed herself for 53 years, Florence still deals with the all correspondence involving In Memoriam donations, i.e writing to relatives and undertakers.

Her other son Raymond, 73, said: “Mother’s contribution has helped to raise the profile of the local RNLI substantially and has also won her many plaudits.

“In 2012 the RNLI made her an Honorary Life Governor, in recognition of her long and outstanding service. The highest RNLI award given to a volunteer.

“She was also presented with a Lifetime Achievement Award by The Wessex Charity Awards that same year.”

Florence however, is very modest about her accomplishments, including her milestone 100th birthday, which she celebrated quietly with her family and later with cake and sherry, with her fellow residents at Braemar Lodge.

She said: “I’ve just lived a day at a time and supported a very worthwhile charity.

“I’m not remarkable at all. It’s all a fuss about nothing really.”