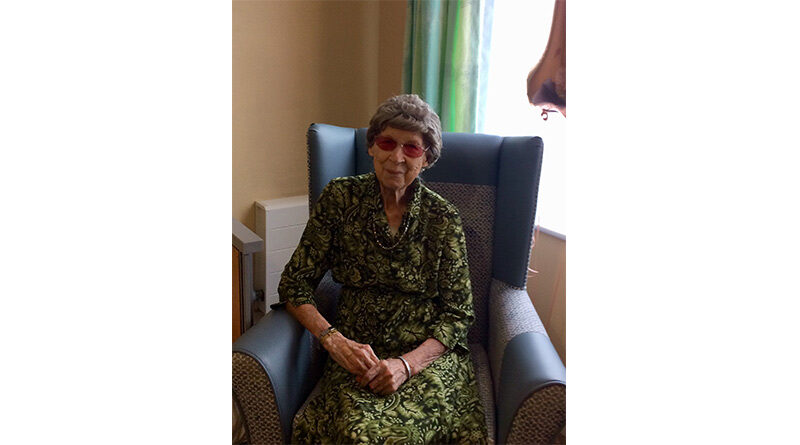 A woman living in Elmcroft Nursing Home in Shoreham-By-Sea has celebrated her 100th birthday with a tea party.

Muriel Murray, known to her friends as Peggy, was born in Surrey on April 14 1921, and has lived at the home since last year.

Described as a ‘popular and feisty resident’, she is one of four siblings who unfortunately lost their father in 1934 at the young age of 43. He had been badly injured during the First World War where he had lost a leg, and suffered with stomach injuries that plagued him for the rest of his life. Their mother, Winnie, died shortly after, aged 49.

Peggy worked at Bletchley Park as a secretary to a colonel during the Second World War, and believes one of the reasons for her good health was due to the marching she did on parade every morning.

Her husband, Colin Murray, worked as a personal manager at International Stores during the 1970’s. They lived together in Harrow in Middlesex where they enjoyed being surrounded by birdlife and squirrels but when Colin retired, they moved to Sidmouth in Devon, where they joined many local societies – including the golf club and lawn bowls.

Although they never had children of their own, Peggy and Colin remained close with Tricia and Alec – Peggy’s youngest sister and husband – and whom she moved in with when Colin sadly died in 2012.

Monica Donald, manager of the Shaw healthcare-operated home, said: “We’ve loved having Peggy at Elmcroft and hope she enjoyed the afternoon tea party to celebrate her landmark birthday.

“It’s welcome news to the staff and residents that COVID-19 restrictions on care home visits are beginning to ease, and with the success of the vaccination programme so far, we hope we can celebrate next year’s birthdays with families and friends in person.”