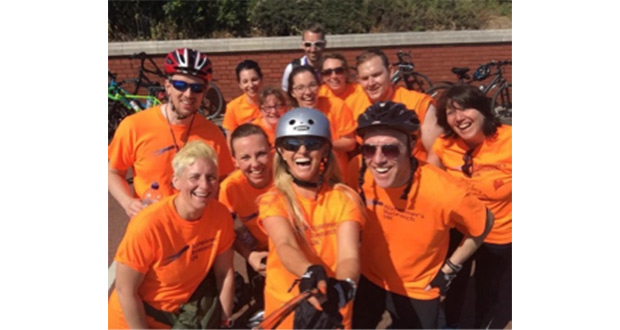 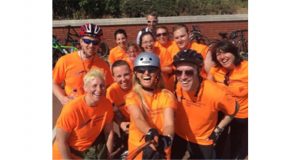 An actress and fitness instructor from Merseyside whose dad died with a rare form of dementia is inviting people to join her on a fundraising cycle ride supporting pioneering research.

Paula Muldoon has organised the 62-mile Braveheart Cycle, from Waterloo to Preston and back, on Saturday 22 September to raise money for Alzheimer’s Research UK.

The 48-year-old, who played Diana Corkhill in soap opera Brookside, has been a supporter of the UK’s leading dementia research charity since 2011 and has raised £43,000 through her annual Braveheart Cycle rides and exercise marathons. She’s hoping this year’s event will bring the total to £50,000.

Paula, who is a personal trainer and nutritionist, was inspired to support dementia research as her father Michael was diagnosed with frontotemporal dementia (FTD) aged just 55 and died in 2012 aged 64.

FTD is thought to account for fewer than one in 20 of all dementia cases. While most people associate dementia with memory loss, people living with FTD usually have changes in their behaviour and personality.

Paula, who lives in Waterloo, said: “This ride will be particularly poignant as this year my dad would have turned 70.

“The only reason I’m a fitness instructor is because of my dad – I owe him my career. Before he was diagnosed with frontotemporal dementia, he was a real entrepreneur. He set up and ran several gyms across the country.

“Having seen the long journey my dad travelled and having witnessed others living with dementia during my dad’s last year, it’s the most heartbreaking of conditions, it’s like losing the person you love twice.

“I’m so pleased to continue his legacy by encouraging people to keep fit and I’m using those skills to raise money for a charity which is very close to my heart.”

Cyclists will meet at the Crosby Lakeside Adventure Centre in Waterloo at 8am, leaving promptly at 8.15am.

The group will ride along the promenade adjacent to the beach, through Hightown and through the connecting path alongside Altcar to Formby. They will then ride through the woods along paths that pass through Formby Golf Club to the coast road. The ride will continue on to Southport and Preston, stopping for lunch at ‘Ego at The Fox’ before cycling back.

The route will be mainly off-road apart from a short stretch through Formby. The route passes by three train stations which gives people an option to choose the length of cycle that suits them.

All participants will be expected to have a road-worthy bike, with a spare inner tube in case of punctures.

The cost of the event is £35 per adult and £20 for under-16s. £12 will be used to provide food at the halfway mark, with the remaining going to the charity. Cyclists are also encouraged to get sponsorship for the event.

Paula, who was made a Champion of Alzheimer’s Research UK in 2014 in recognition of her fundraising efforts, said:

“The event is open to anyone who would like a fun but challenging day out, while at the same time raising some money for a good cause. It’s such a great experience to be able to do something worthwhile, while improving your health.

“We go at the speed of the slowest cyclist and leave no one behind.

“It’s been great to hear about people who have bought their first adult bike specifically to join this ride.

“We’ll also have quite a few cyclists joining us from the North East and Scotland who I had the pleasure of cycling Hadrian’s Wall with in 2010.

“Past rides have been incredible and have created memories for life as well as forging new friendships.”

To sign up for the cycle ride or for more information email Paula at paula@corefit.org.uk

To sponsor Paula go to www.justgiving.com/fundraising/paula-muldoon