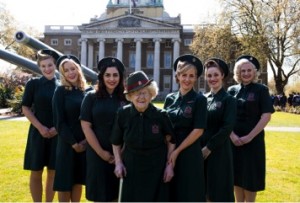 Royal Voluntary Service, remembered and paid tribute to the members of the Women’s Voluntary Services (WVS), the female volunteers who kept the home front running during the Second World War.

By 1943, in just five years, the WVS had over a million volunteers making it the largest voluntary organisation in British history during the Second World War. Nicknamed “the army that Hitler forgot”, the ‘ladies in green’ supported civil defence, helping people after air raids, providing rest centres, first aid and the evacuation and billeting of children.

Margaret Miller, who still volunteers for Royal Voluntary Service at 104 years old, signed up to WVS in 1939 when the Second World War broke out and barrage balloons blighted the landscape of her Glasgow community. Attached to the Glasgow Royal Infirmary, Margaret’s main role was to support the wounded and displaced, particularly injured troops with no family nearby and to provide comfort to visiting relatives.

“I deci ded to volunteer in 1939 because I thought it was time to help the war effort. During that time we had wounded soldiers being bought to local hospitals so I visited those soldiers who had no family in Scotland on VE Day. I remember feeling a marvelous sense of relief that the war was over.

“I started the first stroke club in Scotland because there was nothing else being done to help people who had experienced a stroke and I still volunteer there as often as possible today.”

“I would like to say a huge thank you to the women who built the foundations of the Royal Voluntary Service we know today by providing practical help to anyone who needed it during WW2. Without their compassion and commitment to the cause, life on the home front may well have fallen apart. VE Day must have been a very special day for our volunteers who worked tirelessly throughout the war providing help to those who needed it”

Margaret Miller’s memories of VE Day are being shared as part of #VEDayMemory, a project instigated by Imperial War Museums (IWM), partnering with Royal Voluntary Service. IWM is encouraging everyone to discover the stories of those in their families and communities who witnessed the day – so that their memories can be shared with others from 1-11 May using the hashtag #VEDayMemory.

“We are so lucky to have people in our families and communities who remember VE Day first-hand. The upcoming anniversary provides a great opportunity to talk to them and find out more about their experiences of VE Day – where they were, what happened and how they felt.

We know from our own archives that there are a huge wealth of stories about that time just waiting to be told and shared with todays and future generations. We’re delighted that Margaret Miller has been sharing her memories of VE Day and it has been a pleasure to work