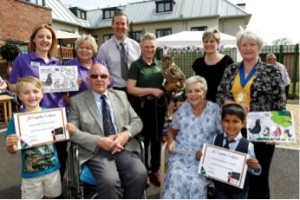 A host of feathered friends including kestrels and owls flew into Winchcombe Place when the Newbury care home hosted a fun falconry event last week.

Residents, their families and visiting members of the public made the most of the rare opportunity to get up close to many different birds of prey when Fir Tree Falconry dropped into the care home on Maple Crescent.

The Mayor of Newbury, Jo Day, also visited to present a bird table to the neighbouring Winchcombe School on behalf of the care home, after pupil Husain Misbah Hameed, aged five, was announced as the winner of a bird-themed colouring competition. Husain Misbah Hameed received a family ticket for a falconry experience, courtesy of Fir Tree Falconry, for his winning entry. Tristan Wallace, aged six from Robert Sandilands Primary School, was announced as the runner-up and attended the event as a VIP guest.

Sacha Liddiard, customer relations manager at Winchcombe Place, said: “Many residents here have an active interest in wildlife and nature and, following the success of our involvement in the RSPB Big Garden Birdwatch earlier this year, we invited Fir Tree Falconry to bring along some birds from their private collection for a free community event.

“We were thrilled so many local people joined in the fun, including the Mayor of Newbury and the nearby Winchcombe School and Robert Sandilands Primary School. The colouring competition was judged by a panel of seven residents here at Winchcombe Place and everyone was very excited to see the winner and runner-up announced and to present the well-deserved prizes. The event also coincided with a week of celebrations for the care home’s first anniversary, so it had special significance for us all.”