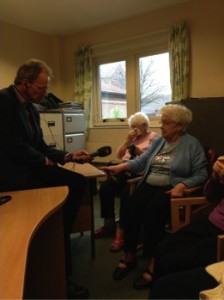 The home was visited by Dr Martin Alioth, the UK and Ireland Correspondent for the station. Swiss National Radio is an equivalent of the BBC. They were interviewed for a half hour feature called ‘International’, which looks at topical global issues. The feature will be broadcast across Switzerland on 25th April.

Charlotte Grange is a 46 bed care home that supports older people, including people who live with dementia. It is part of the national social care charity Community Integrated Care.

Dr Alioth discussed with residents their perspectives on the last five years of UK politics, and their hopes for the next government. They shared their views on issues including whether voting should be compulsory, the rights of older people and how austerity has affected their local community.

The residents also discussed how they will be casting their vote at the forthcoming General Election, either by post or by visiting their local polling station. Community Integrated Care is currently undertaking a national campaign to ensure that the people it supports who want to vote are enabled to do so.

Margaret Spence, Home Manager at Charlotte Grange, says, “It was a real honour for our home to be featured on Swiss National Radio and for us to be able to share how we are supporting our residents to vote. It is important to us that the people support are respected as the citizens that they are, and their voting is key to this. As Martin saw, many of our residents have strong and insightful political views, so it is important that we support them to express them at the ballot box.”

Dr Martin Alioth praised the atmosphere at the home, saying, “It was wonderful to visit Charlotte Grange. Everybody, staff and residents alike, kept smiling, there was laughter to be heard and conversations wafting through the building. The detail I was most impressed with concerned the practice of involving resident in new staff appointments. That spoke volumes about the attitude of the management towards the people in its care.”