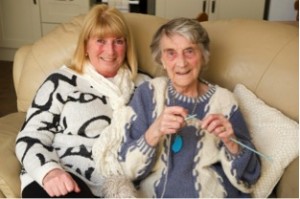 When 88-year-old Joyce Hayes moved into the new Amblecote Gardens extra care facility in Salford she could have had little idea of the lasting impact the decision would have on her and her family.

Joyce had been reluctant to leave the home she had shared with her husband William in the Walkden area of the city since they were married 68 years ago, despite the deterioration of her Alzheimer’s disease.

The couple had planned to move into a new home together, but after William passed away last year, Joyce called off the move and became increasingly reliant on her family for the support she needed to continue living on her own.

Joyce’s granddaughter Sam Clarke explained: “The plan was that they would move into more suitable accommodation together, however, when my granddad passed away she became very anxious about the move. She had just lost her husband of almost 70 years and didn’t want to move out of the home they made together.”

Joyce had suffered with Alzheimer’s for around five years, but the passing of her husband had sparked an acceleration of the disease. She had five children, eight grandchildren, and 13 great-grandchildren, but as is often the case the family was spread out across the North West.

Sam added: “It was heart-breaking because we were a 25 minute drive away in Wigan, and always worried about my grandma. The family was always very nervous and we wanted to check that she was okay.”

In September last year, Joyce’s family secured her a place at the newly opened Amblecote Gardens extra care scheme run by City West Housing Trust. The scheme is designed to support people living with conditions such as Alzheimer’s disease, and ensures that its residents are integrated into the surrounding community.

Since the move Joyce’s family say that they have seen a staggering improvement in her condition.

Sam said: “To see this progress with an 88 year old is amazing. The fact that she is much calmer and happier is having a massive role in helping her deal with the Alzheimer’s.

“The biggest breakthrough came a few months back. She had always been a fan of knitting and made her own clothes. But the disease had put a stop to that. She would get very frustrated and gave up completely a few years ago. One day we walked in to find her knitting a new scarf. It was so pleasing to see.

“She is much calmer, and has made some new friends. She loves the staff and is always singing their praises. When she is with us she is always keen to get home to Amblecote.”

Since arriving at Amblecote Gardens Joyce has established a routine and spends a lot of time in the communal dining area which has helped her make a number of new friends.

But it is not only Joyce that has enjoyed a change of lifestyle over the past six months. Her family say that knowing she is in safe hands is having a big impact on them too.

“The fact that there are people there to care for her around the clock means everything,” said Sam. “Now we don’t have as many sleepless nights worrying. It had a big impact on my mum. She was very worried about her.

“We had some tough choices. My grandma had lived in Salford all her life and we didn’t want to move her away from what she knew just to be near us. We didn’t think that was fair.

“There were some really bad times. The only thing that kept us going was that we knew that there was some kind of supported living option on the horizon.

“The set up at Amblecote Gardens is perfect. She is part of a community and she has her own front door.

“We need more of these kind of facilities to support people like my grandma.

“She is a really happy person now – not just a woman living and dealing with her illness.”