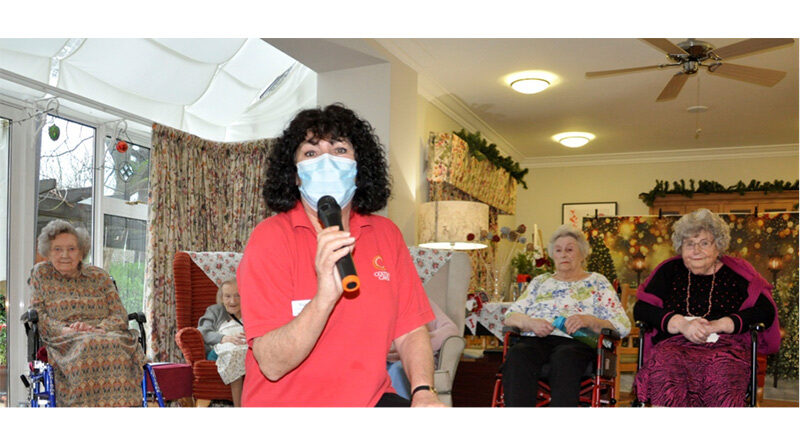 Music fans among the residents at a Dorset care home have begun enjoying regular live performances in their lounge from a Eurovision Song Contest winner.

Colten Care has appointed Nicky Stevens from pop group Brotherhood of Man as a Companionship Team Member at its Ferndown home, Amberwood House.

Nicky and the band gained worldwide fame when they won Eurovision in 1976 with the song Save Your Kisses for Me.

It went on to be a number one hit in 33 countries, holding the top spot in the UK for six weeks and becoming one of the most successful Eurovision songs ever.

A classically trained singer and pianist, Nicky has been a professional musician all her adult life and a member of Brotherhood of Man since 1972.

Like many other performers, she and the band had been looking forward to a busy season of gigs until the Covid crisis brought much of the live music industry to a halt.

Nicky, still the only Welsh person to have won Eurovision, said: “I’ve spent 48 years in Brotherhood of Man with same line-up of four people. We sometimes joke that we’re ‘still working and walking’. However, because of the pandemic, all our work was wiped out. We had a very full diary planned but our last gig was in March 2020. I am also a voice coach and a singing teacher and I run a choir. I was really busy then suddenly had nothing. Just by luck I was on a week’s holiday and saw an ad for Colten Care entertainers and companions. I applied, had an interview and got the job.”

“It’s absolutely fantastic” she said. “I’ve had such a warm welcome from the staff and residents. It’s a totally new scenario for me, going into a workplace where people are doing different jobs, but everybody is really lovely to me.”

Nicky sings and plays a range of music for residents including 50s and 60s hits, jazz standards and songs from the war years. She is currently planning a ‘Cockney afternoon’ featuring old London singalongs.

“Music is so therapeutic and uplifting,” she said. “The residents tell me they really love it. Some join in straight away if they know the tune. One lady calls me her ‘little nightingale’. They know I can sing but some don’t know I won Eurovision. I would like to say they are in total awe but they just accept you are performing and appreciate it. As long as they enjoy what I’m doing with them, that’s the main thing.”

As well as her career in music, Nicky has done voluntary work in a hospital in Essex for people living with dementia and other mental health issues.

Nicky said: “I have a great learning curve every day. It’s a joy to be able to contribute to the wellbeing of the residents and provide stimulation for them through varied experiences and activities. They are always pleased to see new faces. So many elderly people around the world are not seeing their families as much because of the pandemic. Witnessing our residents being happy because of what we do as a team makes all our work so worthwhile.”