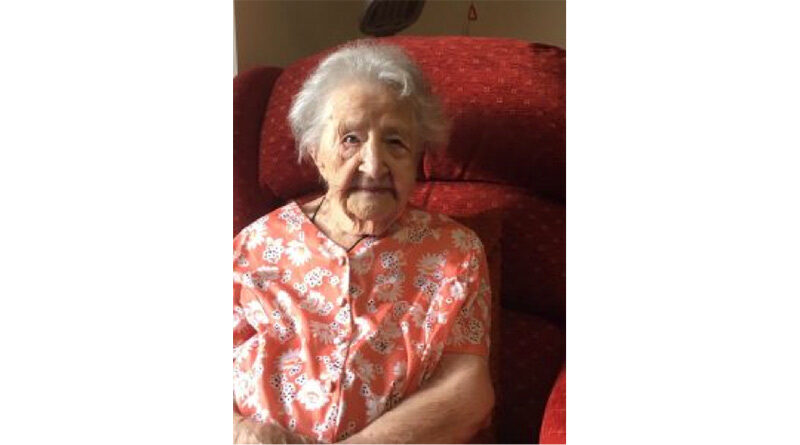 The children made Christmas cards for many of the local care homes in the area, but when the school got in touch with Dora Matthews House in Coleford and heard about Joan’s milestone birthday, they wanted to do something really special to mark the occasion.

Teachers and children at the school have worked brilliantly to create a series of special gifts for Joan which she has received today, Christmas Day. Her special presentation includes a hand drawn A3 Happy Birthday plaque with an illustration of a rainbow and all of the children’s names (over 180) written into it. It is framed so that Joan is able to display it.

The special part is hidden behind three QR codes- which when scanned by the Care Home staff, linked to the school’s Twitter page so Joan could watch three groups of school children singing Happy Birthday to her.

Lucy Stevens, SENDco at Berry Hill Primary School, says:  “We are very community oriented at Berry Hill and having had such positive feedback from the rainbow letters and cards we sent during lockdown, we felt it was especially important to send Christmas cards. When we heard Joan was celebrating a milestone, we felt compelled to do something special for her.

“Our gifts to Joan allow the children to give their time and kindness as a way of connecting with others in our local community. It’s very important, particularly during this difficult year, to think of others and do things that will brighten their day and show they’re thought of.”

Julie Element, Manager at Dora Matthews House says:  “It’s a huge achievement to reach 100 years, made even more special that Joan becomes a Centurion on Christmas Day! We couldn’t be more delighted with the huge effort from the caring staff and children at Berry Hill primary school. It has made Joan’s day even more special and she has absolutely loved watching and listening to the children sing.”

Alongside the messages from the school, the team at Ambient Support organised a visit from her son, who brought along her birthday cake, a traditional Christmas lunch with residents in her secure bubble and an extra special musical activity. 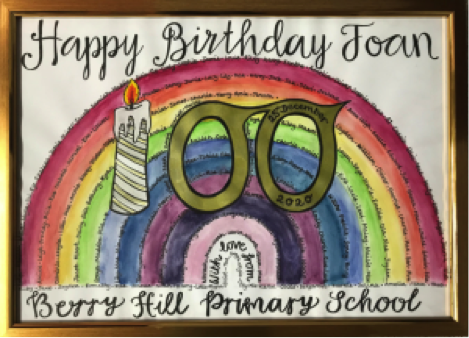 On reaching 100, Joan says: “It’s wonderful to reach this milestone birthday and I am overjoyed to receive such a kind and thoughtful tribute from the school children. It brought a huge smile to my face and it is something I will watch many times over”.

Tom Harrison, Director of Operations at Ambient, said:  “This is a fantastic example of people going above and beyond to bring joy in these stressful times. Against the odds, the staff at Berry Hill along with our Ambient team at Dora Matthews House have united to give Joan a spectacular celebration. This is a brilliant example of our staff living by ‘The Ambient Way’, which is all about being exceptional in what they would simply call their ‘day to day’.”