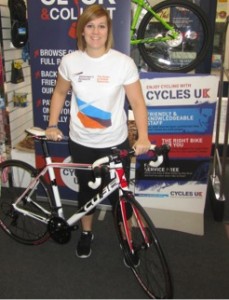 Helen German has been made a Champion of Alzheimer’s Research UK in recognition of her exceptional fundraising.

Helen German, from Stanford-le-Hope, Essex, has been made a Champion of Alzheimer’s Research UK, the UK’s leading dementia research charity. The health club receptionist has been supporting the charity for nearly two years and in that short time has raised almost £5,000 for vital research into dementia. The 29 year old supports the charity in honour of her nan, Phyllis, who has vascular dementia.

As a Champion, Helen joins a small but growing group of 35 people nationwide who have been nominated by the charity for their exceptional support.

Helen German during her 90-90 challenge

Over the past two years Helen has constantly pushed herself for the charity. In April this year she began her most challenging fundraising event to date – to cycle 90km a day for 90 days on a static bike. Helen began the cycling challenge a day after her nan’s 90th birthday and incredibly raised over £3,000 for her efforts.

Prior to this Helen completed a Target Twelve Hundred challenge. The fundraising initiative asks people to pledge to raise £1,200 in 12 months, any way they want to. Energetic Helen smashed her fundraising target by completing a range of gruelling challenges including a triathlon, a 10k run and a 100-mile cycle ride.

“My nanna was diagnosed with vascular dementia in 2011, aged 86, shortly after my granddad passed away. We noticed she wasn’t eating properly, was repeating conversations and was forgetting to take her medication. Despite Nan’s condition, I know I am very lucky that I can still enjoy quality time with her as this may not always be the case. She was there when I began my 90-day cycling challenge and there at the end of it – she even hopped on the bike on the last day and pedalled a bit for me!

“I’m thrilled to be made a Champion of Alzheimer’s Research UK. Over the past couple of years I’ve had a lot of support throughout my crazy challenges from my husband, Ian, and my friends and family, so it’s lovely for my efforts to be recognised in this way.

“I will continue to support Alzheimer’s Research UK as I firmly believe that research is the answer to dementia.”

“We are delighted to make Helen a Champion of Alzheimer’s Research UK. Her motivation for fundraising is unwavering and her efforts are bringing us ever nearer to finding better forms of diagnosis, preventions, new treatments and an eventual cure.

“There are 850,000 people in the UK living with dementia today, including over 20,000 people in Essex. With no treatments available to stop the disease in its tracks, we urgently need new ways to combat this devastating condition.

“Research has the power to defeat dementia and Alzheimer’s Research UK is leading the charge. We rely on public donations and it’s thanks to dedicated people like Helen we can help provide crucial resources for our scientists and fund pioneering research, driving the next breakthrough.”