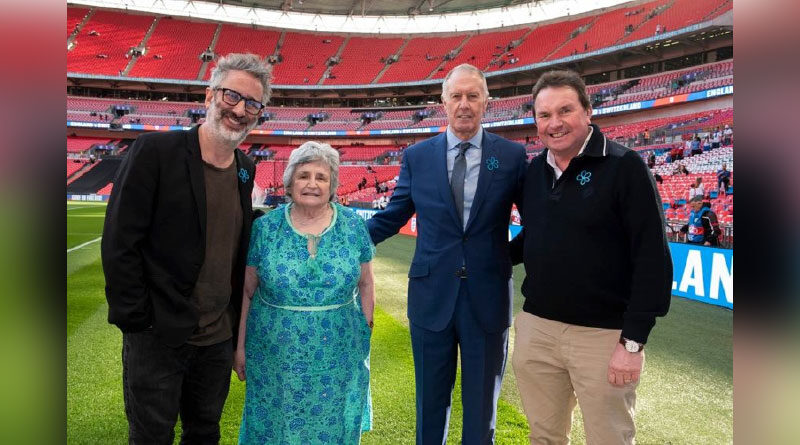 The England men’s team took to the pitch against Switzerland in nameless shirts at the first ever Alzheimer’s Society International match to raise awareness of dementia.

As part of The Football Association’s (FA) partnership with the leading dementia charity to support players and fans affected by dementia, the nation watched on as the squad returned to the pitch after half time with the names missing from their shirts, driving home the idea that football should be unforgettable.

For an England fan, it’s almost unthinkable to forget the name of a player in the national team, but this is a reality for many of those watching the game who are living with dementia.

The powerful gesture displayed in front of a sell-out crowd illustrated the challenges so many people with dementia face every day. The squad have donated these iconic shirts to auction, raising life-changing funds to ensure everyone has access to Alzheimer’s Society’s vital support services.

Gareth Southgate OBE said: “Our players weren’t just playing for themselves or for their country, they were showing their support for the 900,000 people living with dementia in the UK today.”

“It’s brilliant to be back for the first time this year at Wembley, especially to a sell-out crowd – it brings back so many memories for us and just highlights how football should be unforgettable.”

“Taking the names off the squad’s shirts draws attention to the reality of living with dementia and I hope it inspires fans up and down the country to get talking about dementia and support Alzheimer’s Society’s crucial work.”

The 22’ team were cheered on by some very special guests and familiar faces as they played their first match since the international break – it was also the first time the squad have being back at Wembley since the nail-biting moments of the Euros in the summer of 2021.

Alzheimer’s Society Ambassador and ‘Three Lions’ anthem singer David Baddiel hosted a dedicated box for Shelagh Robinson and Stephen Freer, who are both avid fans living with dementia, giving them a once in a lifetime opportunity to watch the game they love in style.

Having recently lost his father to Pick’s disease, a rare form of dementia, earlier this year, David knows all too well the heart-breaking nature of the condition. Sir Geoff Hurst also made an appearance on pitch side to meet Shelagh and Stephen.

David Baddiel added: “It was a real honour to cheer on the squad alongside Shelagh and Stephen today and be a part of the ‘Alzheimer’s Society International.”

“Football is a team sport, and that team goes beyond the players on the pitch; it’s the fans that travel for hours not to miss a game and the millions more that come together to cheer the team on from their homes.

“We all support each other and if we can encourage more people to talk about dementia, we can help people living with it to continue to feel part of the team.”

“The charity’s partnership with The FA will make a huge difference – for anyone affected by dementia, it’s important they know they can get the support they need through Alzheimer’s Society’s vital services.”