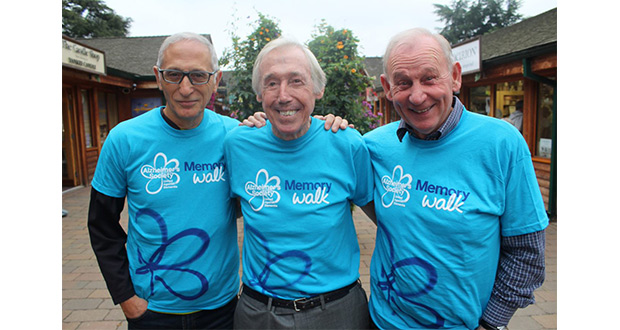 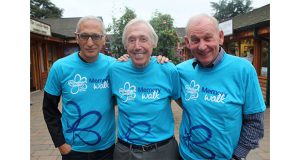 England football legend Gordon Banks has made an emotional appeal for the nation to step up and help defeat dementia.

The 1966 World Cup winner opened his heart about his personal experience of dementia as he urged the public to support Alzheimer’s Society Memory Walk – the charity’s flagship fundraising campaign.

Memory Walk began last weekend and will run until mid-October, with 100,000 people expected to take part in 40 walks nationwide to raise money which will enable Alzheimer’s Society to provide vital information and support, improve care, fund research and create lasting change for people affected by the condition.

Dementia is the biggest health and social care challenge facing society. In the UK, someone develops dementia every three minutes and, while one million people will be living with dementia across the nation by 2021, dementia research still trails far behind other health conditions, after decades of underfunding.

As there’s currently no cure for dementia, it’s vital that people living with dementia receive good quality care that empowers them to live well and helps them to do the things they enjoy. Yet less than 5% of all dementia research, globally, addresses the care and support that people with dementia rely on every day.

Thanks in part to Memory Walk fundraisers, Alzheimer’s Society is now leading the way in rebalancing investment between biomedical and care research, having invested £5.6 million in three Centres of Excellence across the UK, and as a founding funder of the UK Dementia Research Institute, supported the investment of £20m for a care and technology work stream.

Banks, who is an Alzheimer’s Society ambassador, has a special interest in the charity’s research initiatives, having lost his brother to dementia and having seen fellow Three Lions heroes hit by the condition. He says he is more determined than ever to support the charity.

“The fight against dementia is a cause that is very close to my heart,” said Banks.

“I feel more passionate about it than ever because I lost my brother to Alzheimer’s disease and some of my old England team-mates have been affected by dementia.

“I know it can be a really horrible, cruel disease. So I want to get stuck in to raise funds to help our scientists find a cure.”

There are 850,000 people living with dementia in the UK but too many face dementia alone without adequate support. Alzheimer’s Society aims to reach everyone affected by dementia to ensure they are connected to the support and information they need through services including its National Dementia Helpline, online forum Talking Point, publications, and dementia advisers for face-to-face help.

The 80-year-old Banks will take part in the Alzheimer’s Society Stoke Memory Walk on Sunday, September 9 – one of the dozens of walks nationwide this autumn, which the charity hopes will generate £9 million.

“I do weekly walks with a bunch of former Stoke players, with the old boys’ association, and they’re hoping to take part in the Memory Walk which is great because it means a lot to me,” he said.

“I have a personal connection to dementia because of family and friends. It’s obvious that more and more people are affected by dementia everywhere, so we need to act now as a matter of urgency.

“I just hope people nationwide can back the Memory Walk campaign. We need to get everyone behind the fight against dementia.”

Gordon’s brother David died with dementia in 2012 and that family tragedy inspires the former England, Leicester and Stoke goalkeeper.

“It hurts still because I had such good memories of growing up with him,” Banks said.

“My old England team-mates have been like brothers to me so I really did find it very upsetting when I heard they’d got dementia or memory problems.

“Imagine you are half-way through your life and all of a sudden you can’t remember anything. Not just the dim and distant past but also the recent past.

“Thankfully, I know Alzheimer’s Society is doing what it can to help people who have dementia in every way they possibly can. By providing better support and funding scientists to find a way to cure dementia – let’s just hope that one day our researchers can find one.”

“We are enormously grateful that Gordon and the friends in Stoke are rising to the huge challenge it poses by uniting with Alzheimer’s Society to help us defeat dementia.

Alzheimer’s Society is urgently calling on people to unite against dementia and take part in Memory Walk – register now at memorywalk.org.uk