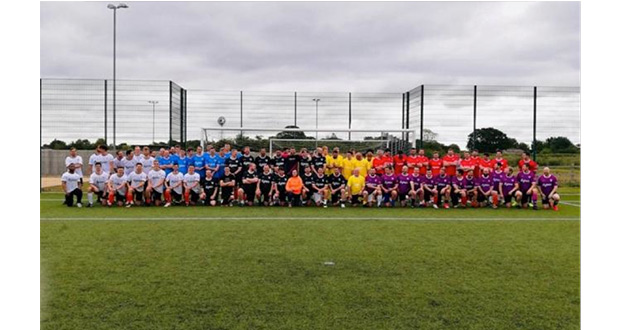 It was the biggest year yet for the annual Dyson Football Marathon – as players raised more than £17,500 for Alzheimer’s Research UK following eight hours of matches. This means over £82,000 has been raised for the charity through this event alone.

On the day, six teams made up of over 80 players played back-to-back football for over eight hours, all in the name of research. The event took place in the Gerard Buxton Sports Facility, in Royal Wootton Bassett, and was jam-packed with games, live music and even bouncy castles to keep everyone entertained. But all eyes were on the pitch as KFC Wimbledon won the final penalty shootout to take the trophy home for 2019.

Organised by Dyson employee Andrew Clifton, who also took part in the event, the football marathon brings together players and volunteers from throughout the company and beyond. Players donated £35 each and were given a fundraising target of £60, with the James Dyson Foundation match-funding a massive £8,000.

Dyson, based in Malmesbury, has been supporting Alzheimer’s Research UK since 2014, raising £268,000. With half of the people in Dyson and throughout the UK knowing someone with dementia, it’s a cause that’s close to many people’s hearts. Money raised from the event will help Alzheimer’s Research UK achieve its mission of bringing about the first life-changing dementia treatment.

Andrew, 34, said about the marathon:

“I’m in shock at how much we have raised again this year for Alzheimer’s Research UK, I think proud is the word really. Every year I meet new people who have signed up to take part, and they’ll open up to me about their own experiences of dementia. It puts it in perspective and shows how important this cause is to so many people.

“It’s a fantastic event, but there’s just so much more to do. I sit back and reflect and it’s amazing to know that this little event that I started has become such a successful charity event for Dyson! When I started it back in 2014, I never dreamed of the success it would become, but in true Dyson spirit, I want to keep improving and grow it. My vision is to get kids involved too, perhaps with a tournament for under 12s or penalty shootouts.”

“We are absolutely blown away by the incredible dedication that Dyson brings to the table every year. We are so grateful to Andrew for organising yet another outstanding event, and to everyone who got involved from Dyson and beyond to make it such a successful day. The money raised this year will really help make breakthroughs in dementia research possible.

“Dementia is the leading cause of death in the UK, but research can change that. The support that we receive from partners like Dyson is vital in creating a world free from the fear, harm and heartbreak of dementia.”