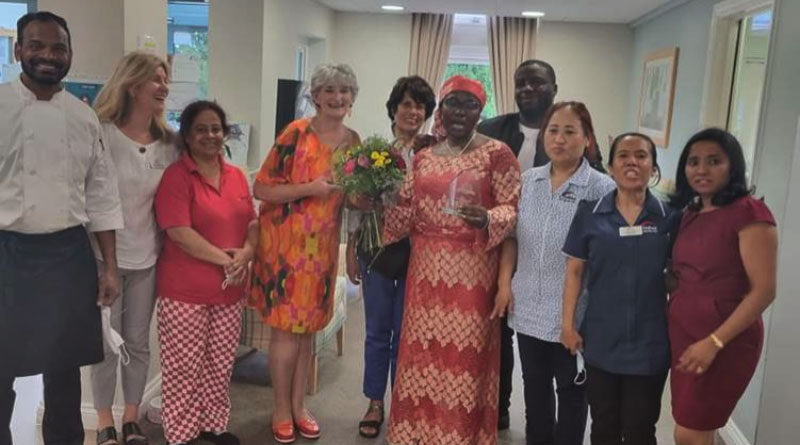 The staff and residents at MHA Kenbrook have plenty of reasons to celebrate following their success at the Brent Adult Social Care Awards.

The home and manager Marian O Hara were both nominated in separate categories and both came out victorious at the awards event, which was attended by Deborah Sturdy, Chief Nurse for the Department for Health and Social Care who gave the keynote speech.

The home was the worthy winner of the “Team of the Year” award, given for their dedication and commitment they have shown caring for their residents as a team, and Marian was declared “Manager of Year”.

The award was the icing on the cake for Marian, who recently celebrated her 20 year work anniversary at the home.

Marian plans to retire at the end of the year, but says the home will still play a huge part in her life.

Speaking after the ceremony, she said:
“I am extremely proud of my team who have been through a lot the last couple of years.

“For me personally, just the recognition is enough and to see the profile of social care being raised is huge.

“I have a very committed team here at MHA Kenbrook, and it was a very proud moment for me and the team.

“The local authorities have been very supportive to all social care providers in the Brent area.

“The award is a great way for me to sign off on a personal note and it’s something that I will always cherish.

“Again, I am very proud of the team and myself and I hope this is something we can continue with moving forward.”