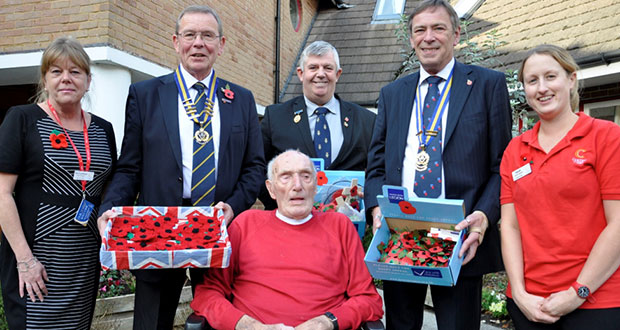 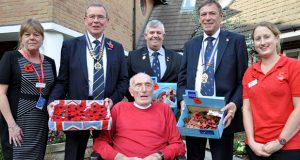 The Royal British Legion has teamed up with a Dorset care home provider on a long-term community partnership.

Residents at three Colten Care homes in and around Ferndown, the focus town for this year’s Dorset Poppy Appeal launch, will enjoy closer links with the town’s Legion club.

Brook View, Amberwood House and Fernhill already raise funds for the appeal each year but now they can host more Legion social and ceremonial events in-house.

Residents, some of whom are service veterans, will also be able to attend get-togethers, tea dances, quizzes and other regular events at the club.

The partnership launch, coinciding with the start of the Remembrance season, brought visits to all three homes from Legion representatives.

At Brook View in West Moors, Grant Parrott, Chairman of the Ferndown branch, said: “This is about Colten Care and the Royal British Legion working within and for the community. We already have links with these homes but now we have a more organised partnership that will benefit residents and at the same time further our community work.”

Among the Brook View residents who welcomed the Legion visitors was 100-year-old ex-serviceman Ted Pickett. As a sergeant in the Eighth Army, Ted saw active service in north Africa and Italy during the Second World War. Now visually impaired, the great grandfather spent seven years in the army altogether before pursuing a civilian career in telecommunications with the Post Office.

Also present was resident Aileen Hervey who received an official certificate of appreciation from the Legion in 1996 after many years of fundraising in aid of the Poppy Appeal.

Beverley Lockhart, Brook View Home Manager and a member of the Legion’s Wimborne branch, said: “Ted and Aileen exemplify the close ties between many of our residents and the work of the Legion. Every year, our residents and staff members get involved with the fundraising campaign. In our crafts groups for example, we knit red poppies which we sell in aid of the appeal. Now, with our new partnership, we can create more social experiences for residents, both in the homes and at the Legion club.”