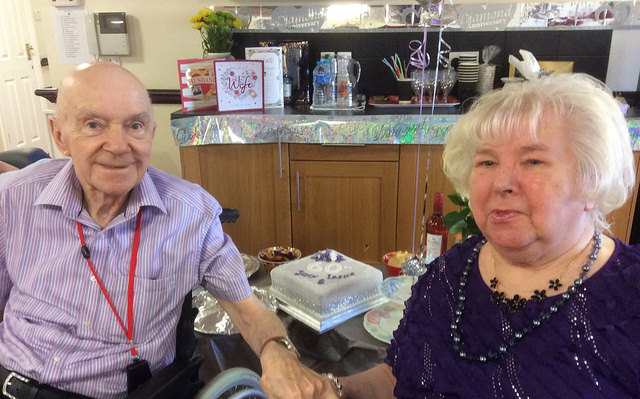 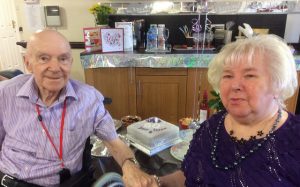 John and Irene Mitchell celebrated their diamond wedding anniversary with family, friends and staff at their home, MHA Laurel Court in Didsbury.

John and Irene were delighted to celebrate their 60 years of marriage and reminisce about the good times they’d shared together. The day was made extra special because of a congratulatory card signed by Her Majesty the Queen to commemorate the milestone.

The couple was treated to a surprise party in the care home where they live together. They enjoyed afternoon tea and a cake hand baked by a friend especially for the occasion.

Surrounded by loved ones, the couple recalled their first meeting as teenagers at a gathering for John’s elder sister’s 21st birthday. Their paths met again at a later date when they were both asked to be godparents for one of her children.

John wrote to Irene which initiated their courtship and they embarked on a two-and-a-half-year engagement. Throughout this period, they enjoyed travelling, often taking trips to different parts of the British Isles.

The pair married in 1958 in Manchester and settled down in Northenden. John was surveyor, but the couple also turned their hand to running several businesses throughout the years, including hardware shops, hairdressers and property. They went on to have three children – Carol, Anthony and Beverley. However, they never lost their love for adventure and travel, ensuring that they made time for trips to Europe, the Caribbean and the USA – they even flew by concord twice.

Carol Mitchell-Cox, speaking on behalf of the whole family, commented: “John and Irene’s loving family and friends very much enjoyed the celebrations and would like to thank the management and staff at Laurel Court in making sure that they had a very special Diamond Wedding Anniversary”.

Manager of Laurel Court, Judith Lathey said: “We all had such a lovely time celebrating the love and life of John and Irene. They’ve had so many adventures together in their 60 years of marriage and we’re truly proud that they’ve been able to continue this, and to share their life together here with us at Laurel Court. Congratulations Mr and Mrs Mitchell!”