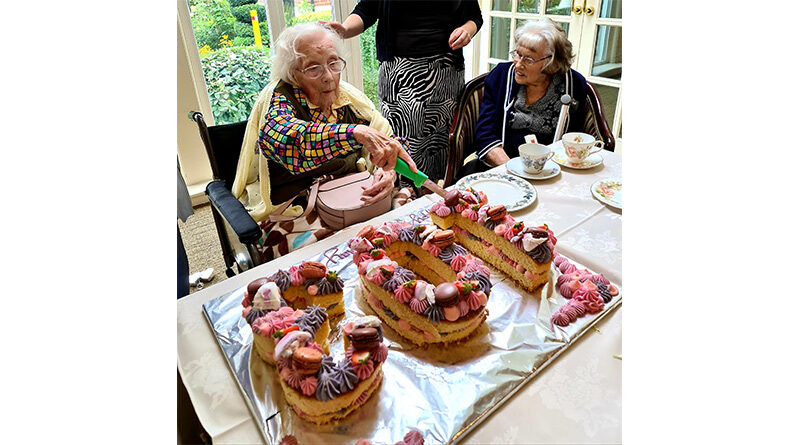 Gwen Warnes, a resident at Sunrise of Purley, celebrated her 103rd birthday recently.

The care home celebrated this special occasion by baking her a beautiful cake made up of the 103 digits to mark her extraordinary achievement. Gwen was also treated to an outdoor live performance from opera singer Demelza Stafford who visited the care home’s garden to deliver a special performance.

Gwen grew up in Southwark, London with her parents and brother. She then attended an all-girls catholic school and remains fond of the nuns who taught her there. During the Second World War, Gwen moved to Devon where she lived on a farm, later owning three farms here and another in Surrey. Developing a love for animals at these farms, Gwen is especially fond of cats, elephants and donkeys.

Gwen then moved to Roehampton where she met her husband, Richard, who she says was a “proper London man”. While living in Roehampton, she worked in the medical profession in Sutton, enjoying games of tennis and dancing in her free time. Richard also had an esteemed military career as a Captain in the Indian Army. The couple then got married when Gwen was 36 and Richard 39 years old.

The couple never had children, but Gwen was graced with a niece and nephew from her husband’s side of the family. Her niece now lives in New Zealand and, as Gwen humorously noted, is “already 70”.

During the War, Gwen enjoyed writing short stories and went on to pick back up this hobby in her 60s. These stories are based on events and people in her life and have featured in four published books.

Living at Sunrise of Purley, Gwen says that her carers work really hard, although she wishes she could do many of their tasks herself. Asked what her advice for living to 103 is, Gwen started laughing and said “determination”. She added that her “Auntie Kate lived to 105 years old”, but after pondering the question, said “who knows” with a smile on her face.