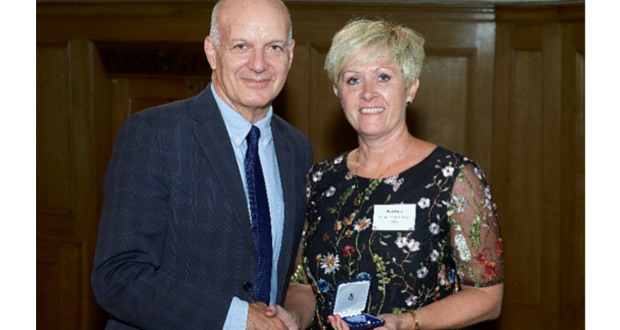 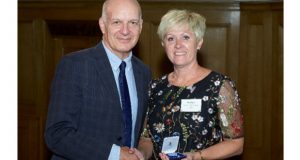 Tracy Paine, award- winning dementia design champion, and deputy chief executive of care village operator Belong, has been honoured with the prestigious Churchill Medallion at an award ceremony in London.  Tracy received the award from the Winston Churchill Memorial Trust to mark completion of a travelling fellowship, during which she researched models of care overseas, with a view to bringing back best practices to the UK care sector.

For her fellowship, Tracy travelled to Australia and the USA for five weeks, where she had the opportunity to investigate the design environments of some of the world’s leading dementia care providers, to see if any of the practices in those countries could be introduced successfully into the Belong operation: already recognised as one of the leading organisations of its kind in the UK.

During the research trip, Tracy had the opportunity to examine a number of the original households in Australia that inspired Belong’s UK model of care and was also invited to be a guest panellist at the International Dementia Conference in Sydney.  The award caps a busy two year period, during which Belong has opened new villages in England, with several more in the pipeline.

Commented Tracy: “It’s a tremendous honour to receive the Churchill Medallion, particularly at a time when our organisation is receiving praise for work in the field of dementia care. Belong is a leading provider in top-class dementia care in England, and it is crucial for us to keep evaluating and innovating the services and nature of care and support that we provide.

“I set out with the intention of seeing how some of the world’s leading providers approach the built environment and I was delighted to find that we are already pioneering some of the best practice here in the UK.

The Fellowships were set up in 1965 in memory of Sir Winston Churchill.  Since then, over 5,400 Fellowships have been awarded.  Past medallion recipient and distinguished photojournalist, Nick Danziger presented this year’s awards.

The Churchill Medallion itself is a unique piece, designed by world-famous glass artist, Professor Brian Clarke, himself a Churchill Fellow. It features a digital image of Winston Churchill in striking blue cloisonné enamel on a solid silver disc, with the Fellows’ name engraved on the reverse.