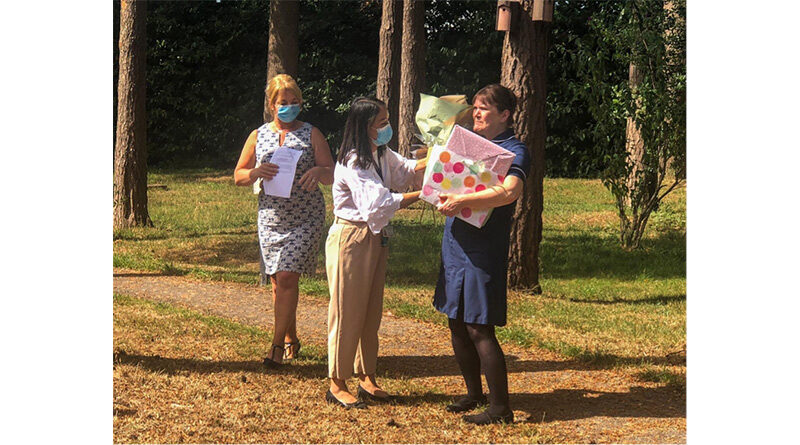 A former nurse who has dedicated the last 30 years to caring for the elderly in Crawley has celebrated her retirement with a party at Deerswood Lodge care home, where she has worked for the last 14 years.

Sue Murray was joined by residents, colleagues and Shaw healthcare operations manager, Clare Gibson, at the care home in Ifield for a garden party, with cream scones and Prosecco to celebrate her dedication to the residents of Deerswood Lodge and her career in care.

Initially training as a nurse at St Georges Hospital in Tooting, London, Sue later moved to Crawley to raise a family. She has worked at a number of care homes in the area since the early 1990’s, initially for the County Council, and then moving to Deerswood Lodge when it opened in 2006. During her time at Deerswood Lodge, Sue worked as a team leader, supporting with residents’ medication and mentoring other members of staff on her shift.

She said: “I’ve dedicated my career to working in care, so knowing when to step back and plan for retirement after so many years was very difficult. It’s been an honour to work at Deerswood Lodge since its creation, alongside a number of wonderful colleagues, who I will sorely miss.”

Wan Nowakowski, manager of Deerswood Lodge care home, added: “Sue is a much-loved personality for all of the residents and her colleagues at Deerswood Lodge. In her role as team leader she has helped develop the next generation of talent, with her efforts recognised by the company in the national Shaw Star Awards in 2014.

“The last few months have been incredibly difficult for everyone working in the care sector, but Sue has stuck by our residents and supported her colleagues through the pandemic. I’d like to thank her for everything she has done for the home and hope she enjoys a well-deserved retirement.”