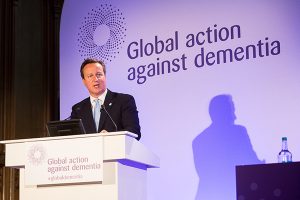 Former Prime Minister David Cameron has been announced as the new President of Alzheimer’s Research UK. Mr Cameron takes up the unpaid role, the highest level of ambassador to the charity, with a visit to its Cambridge Drug Discovery Institute.

Mr Cameron made dementia a focus of his time in office, launching the Prime Minister’s Dementia Challenge in 2012 and kick-starting a drive to deliver major improvements in care and research. Writing at the time, Mr Cameron said that “dementia is one of the biggest challenges we face today – and it is one that we as a society simply cannot afford to ignore any longer.”

In 2013, Mr Cameron helped drive dementia further up the agenda on the world stage by using the UK’s presidency of the G8 to shine a light on the condition, precipitating an international ambition to find a disease modifying treatment by 2025. At a G7 legacy event in London in 2014, Mr Cameron launched Alzheimer’s Research UK’s ambitious five-year £100m Defeat Dementia fundraising campaign as part of a showcase of the UK’s lead role in dementia science.

Mr Cameron takes on the presidency as Lady Onslow steps down from the role after many years supporting Alzheimer’s Research UK during a period of constant growth.

“Tackling dementia was a major focus while I was Prime Minister, and although improvements in attention and research innovation have been rapid, it remains one of our greatest health challenges.

“So I’m delighted to take up the Presidency of Alzheimer’s Research UK, an ambitious charity driving medical research to fight this devastating condition. As well as being a world-leading research organisation, the charity is also fighting the misconceptions of dementia that persist in society. Dementia is not inevitable and research is our greatest weapon against it.

“I’m committed to helping Alzheimer’s Research UK transform the lives of those affected by this life-shattering condition.”

“David Cameron joins Alzheimer’s Research UK as our President to continue a mission he instigated through the Prime Minister’s Dementia Challenge: to go further and faster in our research to combat the condition. As a world leader, Mr Cameron has done more than any other to put dementia on the global agenda, driving an ambition shared by all G7 nations to find a disease-modifying treatment by 2025.

“Alzheimer’s Research UK is a hugely ambitious and growing charity, uniquely set-up to tackle our greatest medical challenge. We have a clear focus on pioneering research, working with leading scientists across the UK and the world. We are committed to bringing together the brightest minds and most innovative ideas in powerful collaborations that reach breakthroughs faster. David Cameron’s support of our work will help us continue our positive growth and further bolster our research efforts, through which we will end the fear, harm and heartbreak of dementia.”

‘Decades of underfunding has seen dementia research lagging more than 20 years behind the progress seen in cancer research, which sees more than six times more funding than dementia. David Cameron’s new role as President of Alzheimer’s Research UK will help to keep the spotlight on dementia at a time when we’re all putting the foot on the gas to accelerate dementia research. Last year, Alzheimer’s Society made its biggest single commitment to dementia research, investing £50million in the UK’s landmark Dementia Research Institute.

‘However, better care for everyone’s parents and grandparents today is just as important as the search for a cure for our grandchildren. As the nation’s health and social care crisis worsens, we urge David Cameron to use his new position to advocate for a fairly funded social care system that works for everyone affected by dementia.’