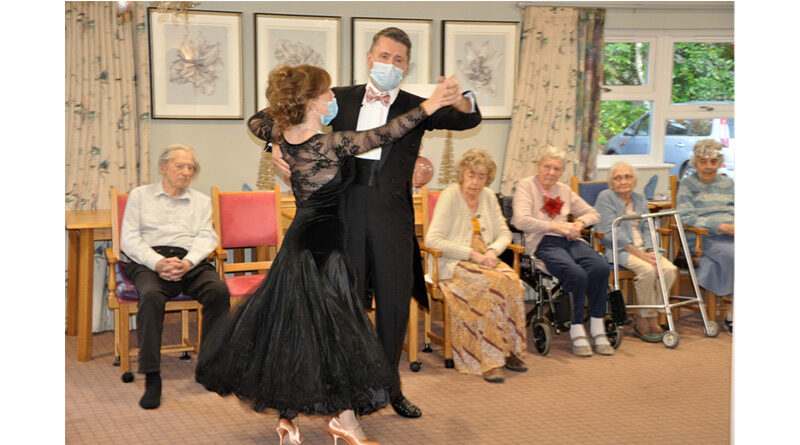 A dazzling afternoon of ballroom and Latin dance performances has brought back happy memories for a former dancer living at a Dorset care home.

Joan Whelan was even inspired to revisit a few moves herself under careful guidance from staff at Colten Care’s Brook View in West Moors.

The show by Bournemouth dance duo Just the Two of Us – otherwise known as Tanya Hutton and Graham Cooper – was organised specially for Joan after she expressed a heartfelt wish to see a live performance and possibly dance again.

Tanya and Graham describe themselves as ‘social dancers’ and have been performing seriously for around three years, giving them the confidence to dance in front of care home residents.

At Brook View, they split the afternoon into two sessions.

The first focused on ballroom and featured demonstrations of waltz, quickstep, foxtrot and tango while the second was devoted to the Latin rhythms of rhumba, chachacha and jive.

Their soundtrack, played over a smart speaker, featured well known tunes such as Nat King Cole’s Let There Be Love and Brenda Lee’s Rockin’ Around the Christmas Tree.

Asked what she thought of Tanya and Graham’s dancing, Joan said: “It was absolutely spot on. I give it a definite thumbs-up.”

Joan, whose favourite dance is the foxtrot, had dance lessons when she was growing up in Birmingham and went on to perform in a troupe that went on national tours, taking in hotels, village halls and seaside resort venues.

After retirement and a move to Ferndown, Joan continued to perform at events such as community tea dances.

After their show and taking time to help Joan revisit some dance moves herself, Tanya and Graham said the visit had been hugely enjoyable.

Tanya said: “It just goes to prove that dance really is for everybody, no matter your age. Dance is a great way to maintain your physical and mental wellbeing as you get older while having fun at the same time. It can be both invigorating and therapeutic.”

Graham agreed, adding: “You’re never too old to try out a move or two. We loved meeting Joan and the other residents and hopefully brought back some happy memories for them.”