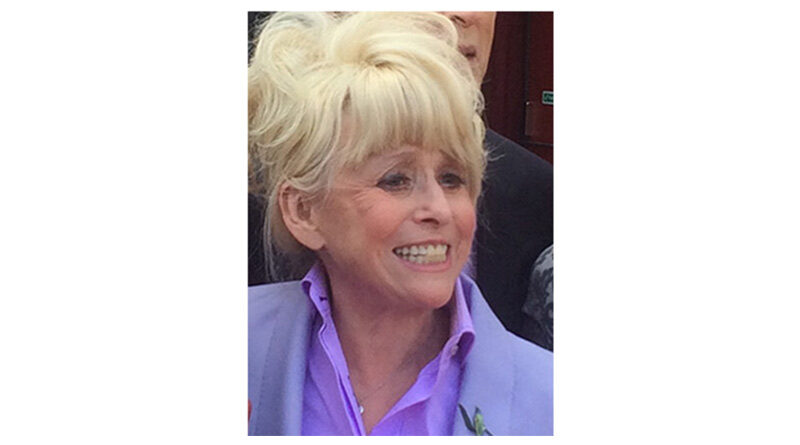 Dame Barbara Windsor, best known for her roles as Peggy Mitchell in TV soap EastEnders and in the long running Carry On films has died aged 83.

Dame Barbra died peacefully at 8.35pm on Thursday at a London care home with her husband Scott Mitchell by her side.

In a moving tribute, Mr Mitchell said: “I’ve lost my wife, my best friend and soulmate and my heart or life will never feel the same without you.”

He added she would be remembered for the “love, fun, friendship and brightness she brought to all our lives”.

Mr Mitchell, who campaigned alongside his wife, said of her death: “It was not the ending that Barbara or anyone else living with this very cruel disease deserve.

“I will always be immensely proud of Barbara’s courage, dignity and generosity dealing with her own illness and still trying to help others by raising awareness for as long as she could.”

Dame Barbara appeared in nine of the 31 films in the comedy series Carry On, and Sparrows Can’t Sing, for which she was nominated for a Bafta, as well as small parts in Chitty Chitty Bang Bang and On the Fiddle with Sir Sean Connery.

After her dementia diagnosis Dame Barbara became an ambassador for the Alzheimer’s Society and met Prime Minister Boris Johnson to raise awareness about the disease.

The star delivered a letter signed by 100,000 people pleading for better care for people affected by dementia and saying the system was “completely inadequate, unfair, unsustainable and in dire need of more money”.

Kate Lee CEO at Alzheimer’s Society charity said that “Dame Barbara Windsor was an amazingly true, much-loved national treasure, and in speaking out about her experiences shone like a beacon for others affected by dementia. Our heart goes out to her husband Scott Mitchell and all their family and friends at this very sad time.”

“Alzheimer’s Society is incredibly grateful to have had Barbara and her husband Scott’s support – what they achieved over the last couple of years for dementia has been truly awe-inspiring. They were absolutely key in helping make Dementia Revolution the most successful Virgin Money London Marathon campaign ever, raising a record-breaking £4 million for the Dementia Research Institute that we co-founded, raising far greater awareness of the need to fund research in this area.”

“They were also instrumental in highlighting the dire state of social care and the need for change, including joining us to visit the Prime Minister, always driven by their desire to help those desperately struggling to cope with this devastating condition – demonstrated again in Scott’s moving statement today. We echo his plea to Government, and, on behalf of the 850,000 people with dementia and their families, we just cannot thank them enough. Dementia remains the UK’s biggest killer and sadly, people with dementia have been worst hit by coronavirus, so have never needed help more. We are here to offer support and advice to anyone affected by dementia.”