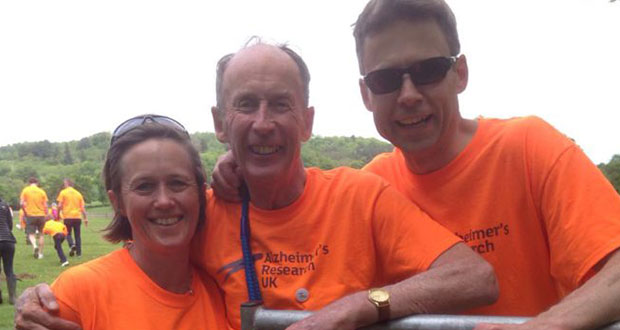 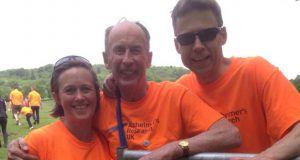 Two fundraisers have raised an enormous £27,000 for Alzheimer’s Research UK after hosting a charity walk in the Surrey countryside.

Patrick Franklin-Adams was diagnosed with early-onset Alzheimer’s 12 years ago at the age of just 59, and since then he and his wife Carol have done everything they can to raise awareness of the condition.

Patrick (centre) and others on Defeat Dementia Walk

Made official Champions of Alzheimer’s Research UK last year, the pair have hosted a number of events such as golf tournaments and walks, and have raised more than £100,000 for the charity.

Their latest event on Sunday 22 May pulled in nearly 200 people who bought tickets to go on a scenic stroll from their beautiful B&B called High Edser in Ewhurst, Surrey.

After being served up bacon butties by Carol, walkers had a choice of a short ‘toddle’ around the lovely fields, a three mile walk, or a five mile walk – making it accessible to people of all fitness levels.

The five mile walk took the walkers up to the nearby woods and up Pitch Hill, giving spectacular views to the south, before going back to High Edser for refreshments of tea, coffee and cake.

Children were also given a teddy bear’s picnic during the event and everyone was given a free Alzheimer’s Research UK t-shirt.

“We have felt helpless since Patrick’s diagnosis and raising money for research has been the only thing we can do to help towards a cure and to protect future generations.

“We had over 200 people attend on the day. So many wonderful friends and relations were helping and taking part so it was a very special day for all of us.

“We can’t thank Patrick and Carol enough for their tireless efforts to raise money for the charity and their continued support, and we are absolutely thrilled that their recent event raised £27,000.

“At the moment there are 850,000 people across the UK living with Alzheimer’s disease and related dementias, including more than 16,000 in Surrey.

“We rely on public donations and it’s thanks to people like Patrick and Carol that we can help provide crucial resources for our scientists and fund pioneering research, driving the next breakthrough.”

You can still sponsor Carol and Patrick for the walk at www.justgiving.com/defeatdementia.