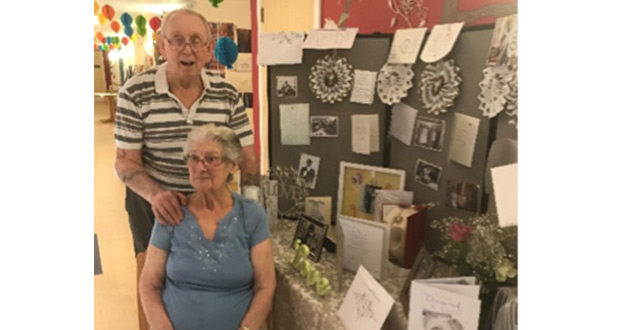 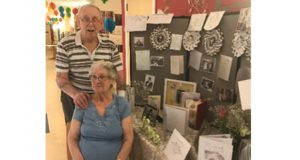 A local couple has celebrated their diamond wedding anniversary with residents, family and staff at Croft Meadow care home in Steyning.

John and Audrey Mundy, 82 and 84 years old respectively, were surprised with a party in the Shaw healthcare-operated care home, which included a display of photos of family members and their wedding day. Among the many cards and well wishes they received, they also received a card from the Queen to congratulate them.

John and Audrey met in West Grinstead during Christmas 1954, when Audrey was 22 and John was 20. Audrey, who was friends with John’s sister, met John as he was on leave from the Navy. He took her to see the Glen Miller Story for their first date – although Audrey didn’t tell him she’d seen it the week before – and they soon became a couple. The pair married at Henfield Parish church in August 1957 and went on to have two sons and a daughter.

Audrey says that her secret to a happy marriage is “to give and take and work things out together”, while John says that the important thing is to “trust one another”. The couple moved into Croft Meadow two months apart from each other, in late 2015.

Sharalee Thrumble, care home manager at Croft Meadow, said: “It was wonderful to be a part of John and Audrey’s celebrations; they are such a lovely couple. The pair are very popular with the other residents here at Croft Meadow and always get involved with daily activities at the home and lead very active lives.”

Shaw healthcare provides a spectrum of services from comprehensive care packages through to low level support in the community for older people and adults with physical, sensory or mental health support needs.