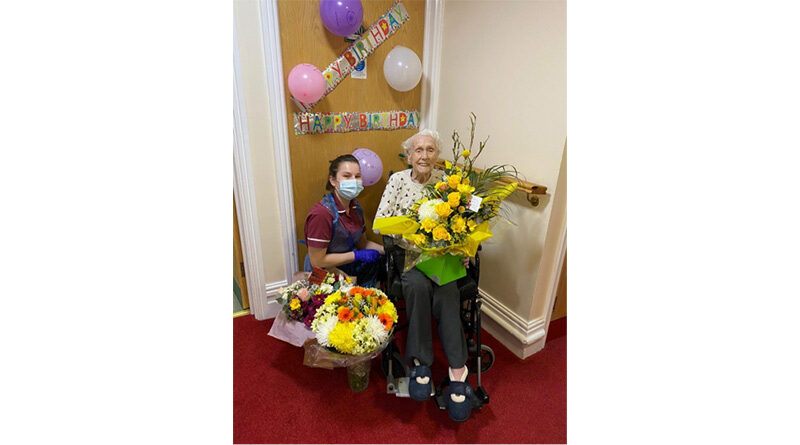 A resident at Magnolia House care home in Cottingham, was showered with her favourite yellow flowers to celebrate her 102nd birthday.

Ivy Thompson was born on Hessle Road in Hull in 1919, just a ten-minute drive from the East Riding of Yorkshire care home. Her husband died when their daughter Linda was only 12, and Linda took on the role of caring for her brother and sister while Ivy supported the family. Ivy has devoted her life to her family as a grandmother and great grandmother to many adoring great grandchildren.

Ivy prided herself on her work. During her early 20s, Ivy helped the World War II effort by moving to London to help clean the rust off the rifles used by the British army.

Ivy remembers her milk round most fondly. She tells stories about herself and two other young ladies pushing their wheelbarrows full of glass bottles around. She said that she would banter with the other girls on the milk round, always joking that she would steal all their customers. She was so popular on the milk round that everyone around Hull knew her face and would chat with her. Ivy has worked for most of her life, and since retiring, she enjoyed spending time with her family and relaxing.

Ivy described herself as a workaholic and believes that the recipe for a long life is hard work and independence.

Staff at Magnolia House described Ivy as a “delightful character” and were thrilled to be celebrating such a special milestone with her.

Lindsay Altoft, home manager at Magnolia house, said: “Ivy is an inspirational woman who deserves to a special celebration on her 102nd birthday. It has been a pleasure to get to know Ivy and listen to the stories of her life.”