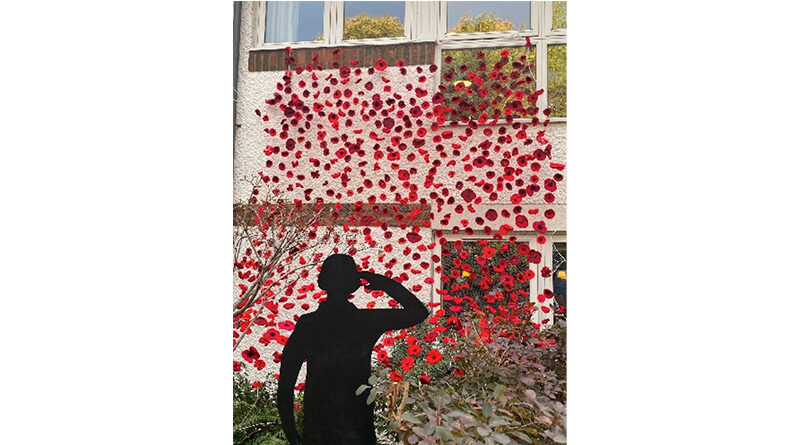 A public display of Remembrance on the frontage of a Winchester dementia care home has been boosted by a community appeal.

The cascade of nearly 800 knitted or crocheted poppies features prominently outside Colten Care’s St Catherines View, providing a focal point for the home’s residents, staff, visitors and passers-by to reflect on.

Laura Sheldrake, Companionship Team leader at the Stanmore Lane home, invited friends and contacts in the community to contribute their handiwork for what one resident’s daughter has described as a ‘moving and beautiful’ display.

Laura said: “I wanted to make a display outside our home this year and knew I needed lots of poppies to make it work, so I put out a plea on Facebook for anyone who would be able to knit or crochet poppies for us to use.

“One Winchester lady Mo White knitted nearly 300 poppies alone, an incredible amount. I think she was starting to knit them in her sleep at the end.

“We also thank city residents Melanie Etheridge and Zara Coleman who knitted and crocheted over 100 each.”

Poppies started arriving not only from Winchester but also neighbouring Chandler’s Ford.

The combined total, including those from the community and those made by St Catherines View residents and staff, was 795.

Laura added: “I was not expecting so much interest and so many poppies to be made by local residents.

“It took a few weeks to attach all the poppies but once it was done and put up it was worth all the hard work everyone put into it.

“We had a silhouette of a solider that our maintenance person Trevor Warder cut out by hand and painted black. We think it finished off our display perfectly.”

Chris George, Chairman of the Royal British Legion’s Winchester branch, saw Laura’s appeal, offered to spread the word about it and came to see the display personally once it was put together.

Chris said: “On behalf of my branch, I would like to thank Laura for all the hard work and effort she has put into making such a wonderful display.

“It is important that everyone has the opportunity to remember, and Laura has made sure that has happened for the residents at St Catherines View.

After posting images of the display online, Laura received more than 1,000 Facebook likes and particular congratulations from the daughter of a St Catherines View resident who said: “I saw this today at my mother’s care home. It was both moving and beautiful. Thank you.”

As well as St Catherines View, Colten Care’s 20 other care homes across the south have been holding services and poetry readings for Remembrance season.

Poppy displays have been created at homes including Abbey View in Sherborne and Outstanding-rated Amberwood House in Ferndown.

Abbey View residents also travelled by minibus to Sherborne Abbey to observe the two-minute silence at 11am on 11th November.

And residents at Brook View in West Moors produced a wreath to take to a Remembrance service held by the Dorset village’s parish council.