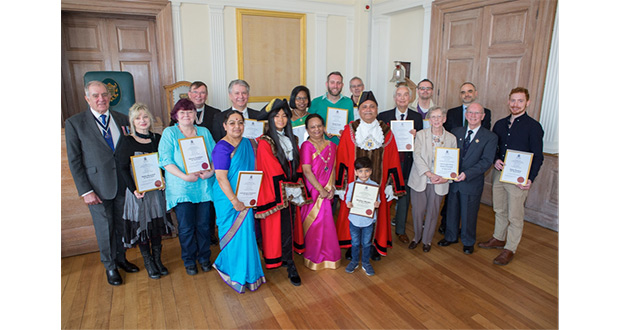 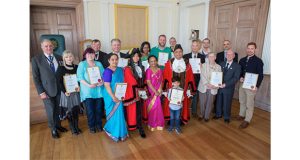 A family has been recognised for their many years of volunteering by the Mayor of Kingston.

Sisters Lesley Parvin and Shirley Pass, and their husbands John Parvin and Terry Pass, were awarded a Mayor’s Group Community Award for their service at The Royal Star & Garter Homes.

The presentation took place at the Mayor’s Community Award ceremony at the Kingston Guildhall on Monday, 18 March, and was attended by John and Lesley. Shirley and Terry were unable to attend.

The family first started volunteering for the Charity at its Richmond Home in 1993 when Lesley and Shirley’s father Leslie Boswell became a resident.

Now volunteering for its Surbiton Home, the family has between them amassed nearly 100 years of voluntary work through helping The Royal Star & Garter Homes, which cares for ex-Servicemen and women and partners living with disability or dementia.

She and Terry also help with outings and activities in the Home such as concerts and events. Unfortunately, ill health has restricted Terry’s volunteering with the Charity over recent months, but he is hoping to return in the near future.

John, Lesley, Shirley and Terry spend time chatting to residents over cups of tea and coffee, reading them newspapers and also helping with the weekly skittles competition.

Kingston Mayor Thay Thayalan said: “It was a proud and inspiring occasion to present these awards, which recognises the amazing contributions of those who have given their own time for the good of the community and help others. There are huge number of community-minded people in Kingston. The Community Awards acknowledges the achievement of these individuals and appreciates their contribution.”

In January, John was awarded a British Empire Medal in The Queen’s New Year’s Honours list in recognition of voluntary services to Veterans. Speaking after the Mayor’s Community Awards, the great grandfather from Mitcham said: “It’s nice that this is for the family. We all started together and I’m glad that we can all share this award together.”

The Charity’s Director of Care, Pauline Shaw, also attended the ceremony to read our volunteers’ citation. She said: “It was humbling to be surrounded by so many people who have done so much for their community. I’m especially thrilled that the extraordinary service provided by our four volunteers has been recognised by the Mayor.”