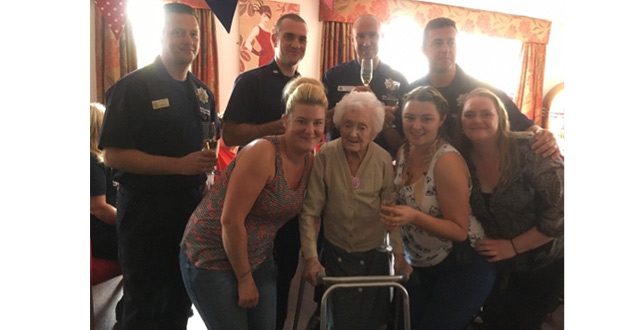 Amy Hirst has celebrated her 104th birthday in style, with a nostalgic trip in a Cadillac coupe and an ‘around-the-world’ themed party at the Belong care village in Atherton where she lives. Well-wishers included Andrew Whyment from Coronation Street, Atherton’s fire crew who surprised Amy with a hand delivered card and over fifty cards and gifts from local businesses and friends of the care village.

Amy, from Leigh, who lives in Pretoria household at Belong Atherton, began her big day by being picked up by John Turner, a former professional wrestler, in his light-blue 1959 Cadillac coupe – Amy’s favourite car. She then went on a trip down memory lane as she toured the areas where she grew up in Leigh, stopping off on Charles Street, where she lived for many years.

Afterwards, the birthday girl returned to Belong Atherton for a party in The Venue, the village’s hub for socialising and events. The ‘around-the-world’ theme was chosen to reflect Amy’s time spent travelling around the world throughout her career as a dancer. Each table was decorated to represent a country that Amy has visited, including Spain, Canada and Switzerland. Guests included residents, staff and members of the local community, who enjoyed a buffet and drinks from the bar

Amy was joined by members of Atherton’s Blue Watch Fire Crew, who came to present Amy with a birthday card, much to her surprise – a gesture that Amy said made her day. She also received a phone call from Andrew Whyment (Kirk in television’s Coronation Street) who wished her happy birthday.

The afternoon’s entertainment featured a singer, Gary Alexander, who sang golden oldies and songs about travelling such as ‘Fly me to the moon’, by Frank Sinatra.

The local community also came together to make Amy’s day special. The local card shop provided decorations for The Venue; a birthday cake was donated by the local Tesco store; Boots gave Amy a voucher; balloons in the shape of 104 were given by Country Baskets; and Experience Day customers at Belong Atherton potted plants to decorate the room. Amy received over 50 cards altogether.

Amy said: “I had such a wonderful day. It was my favourite ever birthday. I am overwhelmed by how many people contributed to making it so special. Thank you to everyone.”