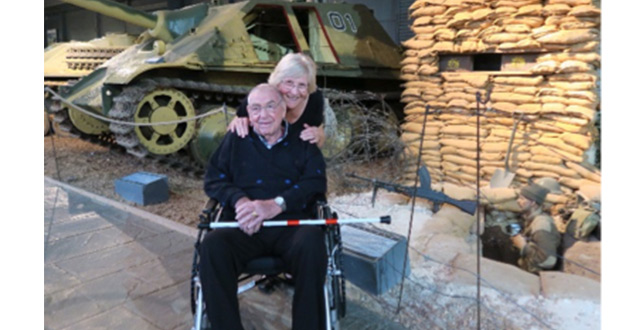 Residents at The Meadows, the Minster-run care home in Haverhill, Sussex, have been transported back in time to wartime Britain with a visit to the Imperial War Museum at RAF Duxford. The trip allowed residents to get up-close to both civilian and military aircraft dating from World War I to the present day and learn about the airfield’s role in the Battle of Britain.

The group of residents, their family members and staff from The Meadows spent the afternoon exploring the airfield, including the site’s hangars, which house exhibitions on the Battle of Britain and 100 years of aviation history and warfare. Famous aircraft on display included a Spitfire, a Lancaster Bomber and a Concorde prototype. There were also military vehicles from D-Day. Residents who went on the trip also got to see the operations room from World War II, which played a crucial role in the Battle of Britain.

The trip evoked memories for many residents, particularly for those who served in the military during World War II.

Clive Derry, who has lived at The Meadows since May, was an army private in World War II. He was responsible for manning anti-aircraft guns on Canvey Island, and seeing the old military aircraft brought back memories of this time for him. Clive was particularly intrigued by the Spitfire he saw and the Condorde test aircraft that was on display.

For The Meadows resident John Wilson, who was a young boy during the war, the excursion evoked childhood memories of wartime Britain. He told us: “I was taken back to the war as I recognised every plane and vehicle we saw. It reminded me of the sounds and smells of different bombs. I loved it.”

Sue Topper, activities coordinator at The Meadows, said: “The residents absolutely loved the trip to Duxford airfield. It provoked lots of conversations about their experiences of the Second World War, and it was really fascinating to hear their stories.

“Trips out like this are always a popular part of our activities programme. Days like this are great opportunities for residents to socialise and reminisce, which can give a real boost to their mood and wellbeing.”