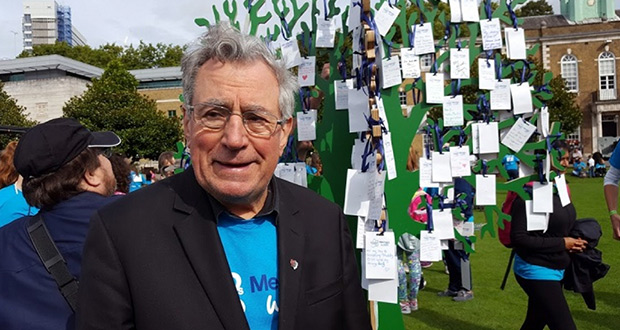 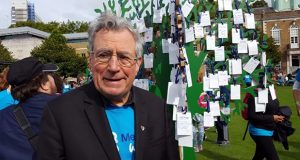 The 75-year-old, who is living with a rare form of dementia, took part in Alzheimer’s Society’s London Memory Walk at the historic HAC Grounds in central London, accompanied by his daughter Sally Jones and his former partner Alison Telfer.

Terry joined forces with walkers in the charity’s flagship fundraising event, almost a year after it was revealed he had been diagnosed with primary progressive aphasia, a variant of frontotemporal dementia which affects his ability to communicate.

Alison said: “Terry can’t speak because he is living with a rare form of dementia and it is just so awful because he can’t do all the things that he used to do.

“But he still enjoys going out for long hikes and so we took part in our local Memory Walk because we wanted to support him continue to do things he loves and because it was for a cause close to our hearts.

“Terry really enjoyed walking with fellow Memory Walkers. When he got home, after lunch at a pub on the way back, he wanted to go – and went- for his normal post lunch walk on Hampstead Heath for another one-and-a-half hours.

“Sadly, we now know just how absolutely devastating dementia can be for families affected by the condition which can be heart-breaking at times, but we felt we had to do our bit to help with fundraising and raising awareness.”

Terry, who directed Life Of Brian and Monty Python’s The Meaning Of Life, and co-directed Monty Python and the Holy Grail with Terry Gilliam, put his best foot forward for the country’s leading dementia charity at an event that was opened by Birds of a Feather star and Alzheimer’s Society supporter Linda Robson.

Linda, who is also a panellist on ITV show Loose Women, said: “It was really lovely to meet Terry on the Memory Walk because he is one of our all-time comedy greats and he’s still got a mischievous glint in his eyes.

“It’s those people who are living with dementia like Terry who inspire me to try to change things for the better for everyone affected by the condition.”

This autumn there are 34 flagship Memory Walks taking place nationwide – including the first night walks in London, Liverpool and Cardiff in mid-October. Around 110,000 walkers are set to raise £9 million to improve the lives of people living with dementia.

Jeremy Hughes, Chief Executive of Alzheimer’s Society, added: “I am so glad that Terry joined Alzheimer’s Society’s Memory Walk. Not only is he show business royalty, but his  presence gave so many people who were taking part a real lift as he showed that he is determined to battle dementia with everything he’s got.

“Someone develops dementia in the UK every three minutes. Every pound raised at Memory Walk will help Alzheimer’s Society provide information and support, improve care, fund research and create lasting change for people affected by dementia. Walk with us at Memory Walk and dementia won’t win.”

There is still time to sign up to Memory Walk. Register now at memorywalk.org.uk to find a walk near you.