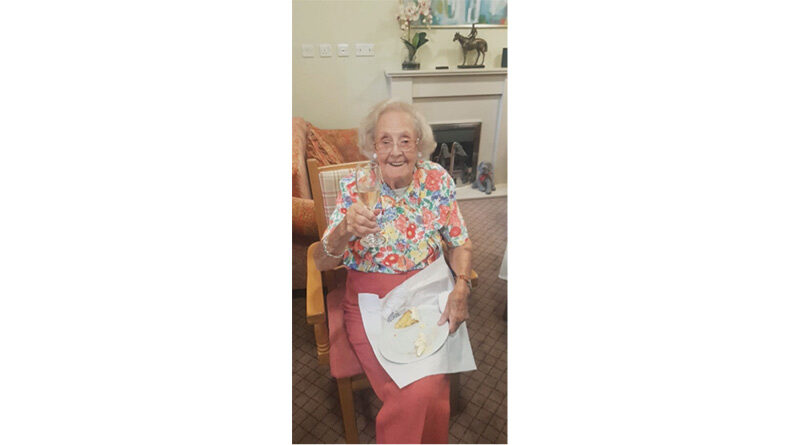 Three residents of a Chichester care home – including a distinguished Royal Navy veteran – have celebrated birthdays on the same day, achieving a remarkable 302 years between them.

Vera Dutton and Lorna Cook, who turned 104 and 98 respectively, stayed indoors to receive birthday greetings at parties from their families.

But stepping outside, former Royal Navy officer Captain Duncan Knight DSC was surprised to be met by members of a Royal Marines band in uniform with a trumpet salute for his milestone 100th.

After watching them play Happy Birthday, Duncan was presented with a framed letter of congratulations written by the First Sea Lord and Chief of the Naval Staff, Admiral Tony Radakin CB ADC.

Duncan, who had a distinguished service career before, during and after the Second World War, said: “I was invited to go outside to ‘see something happening’ but I had no idea it was going to be anything like that. It was an excellent surprise that left me feeling very honoured and emotional.”

The letter from the First Sea Lord was read out to Duncan by Commodore David Elford OBE, the Royal Navy’s Regional Commander for the East of England.

It highlights Duncan’s naval career from joining as a teenage cadet in 1934 to retiring in 1972 after a final assignment in Naples as Acting Commodore at Allied Forces Southern Europe (NATO).

Mentioned in wartime dispatches while serving on HMS Gothland and HMS Hesperus, Duncan was awarded the Distinguished Service Cross in 1942 for his actions in combating U boats in the Atlantic and was later appointed Commander of HMS Comet and HMS Blackpool. He was present in the Bay of Tokyo for the Japanese surrender in August 1945.

According to HM Naval Base Portsmouth, Duncan is believed to be the sole remaining Royal Navy officer to have served throughout the entirety of the Second World War.

The First Sea Lord’s letter concludes: “We owe a great debt to those such as you who served throughout that conflict and afterwards. Your actions both in war and in peace were in the finest traditions of the Royal Navy and are an inspiration to us all.”

Vera was born in 1916, more than two years before the end of the First World War. She went on to work in the retail sector, travelling extensively as a shop window dresser. Her first husband died on a Royal Navy ship in World War Two and she later remarried.

Plymouth-born Lorna is a mother of three sons, two of whom joined her for her birthday. Her working life included five years’ military service while her husband also served in the Royal Navy.

Asked for their secrets of longevity, both Lorna and Duncan said they were simply “very lucky”, Lorna adding: “A regular couple of glasses of wine doesn’t hurt too.”

Emily Hudson, Companionship Team Leader for Wellington Grange, said: “We were keen to do our best to make sure Vera, Lorna and Duncan, and their families, felt special.

“Much work went on behind the scenes but it was all worthwhile and so amazing to see them enjoy such a memorable day.”