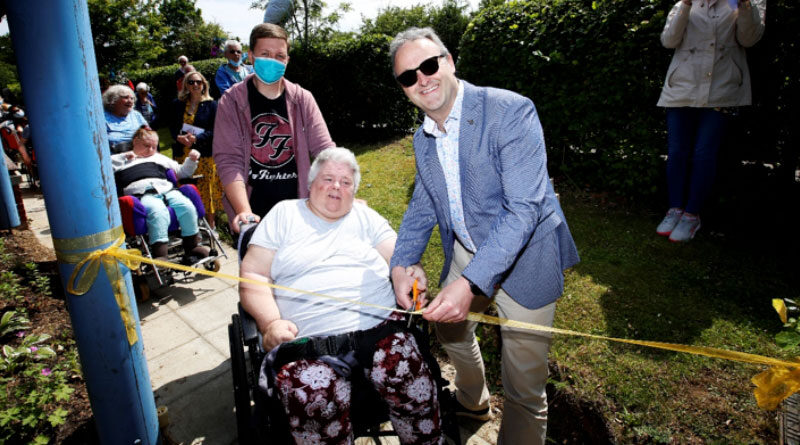 Birchwood, a residential care home in Chesham for people with complex special needs and disabilities, has dedicated a new community garden to the memory of a late friend.

Tina Sharp, who had cerebral palsy and dysphagia, passed away last year from a kidney condition aged 55.

Birchwood opened in 2004 and Tina was one of the first individuals to be supported by the service, and her friends and family were keen to have a quiet space to remember her.

The garden was created by the Friends of Birchwood volunteer group, who raised £1600 and in addition to Tina’s memorial bench, supplied planting areas with water butts to all the people supported by the home, a gazebo, and a path which allows wheelchair access to the garden.

The friends have been actively trying to improve the outdoor space for people supported by Birchwood since 2017, to make it more accessible for those with mobility issues.

A piece of stained-glass artwork – a series of ‘energy balls’ inspired by several late friends of the home – was also commissioned to hang in the garden.

He said: “It was an honour to be invited to Birchwood to open the community garden.

“It has the perfect mix of visual natural beauty, opportunities to create and grow, and artwork honouring the creative spirit of the individuals we support.

“The volunteers have done a fantastic job to make it a sensory experience for all, as well as a place for quiet contemplation. It is perfect.”

Anita Osborne, a volunteer with Friends of Birchwood, said:
“There has always been a great deal of creative talent at Birchwood, and Tina was a beautiful artist, so I am delighted we’ve been able to honour her memory in such a fitting way.

“There have been so many people involved from the conception of a garden space five years ago to the beautiful space we have today, I couldn’t possibly name them all, but every person who has raised money, helped with the planting, laid the paving stones and made suggestions has been invaluable.

“Although the garden is now officially open, we still have plans to develop it further. It will have the opportunity to grow with the individuals supported at Birchwood.”