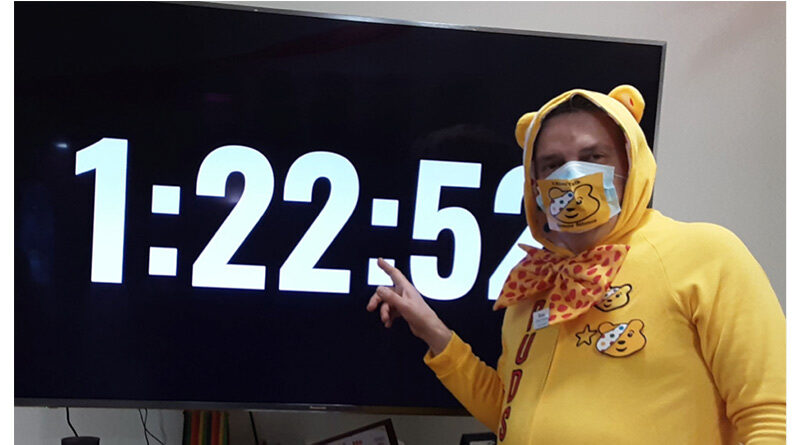 A talkative care home personality dressed up as Pudsey and stayed completely silent for four hours to help residents and colleagues raise funds for Children in Need.

Popular Brian Knight stayed tight-lipped despite all manner of temptations put his way at Colten Care’s Avon Cliff in Bournemouth.

“It was really hard for him as he talks all the time,” said Companionship team colleague Sharon Surgeon. “We were joking beforehand that he would be giving the whole home a break, but he made it, and well done to him.”

After wearing a mask that read ‘I mustn’t talk’ all through his sponsored silence, Brian said: “It’s quite a challenge for someone as chatty as me to stay quiet for four hours in a Pudsey outfit and with people all around but I’m pleased to have achieved it and it’s all in a great cause.”

The residents’ day started with an inspection of teddy bears, some homemade, on display in the Avon Cliff lounge.

It was accompanied by a quiz on the subject of bears and a discussion about all the different bears residents have heard of during their lives.

The fun and games continued with a challenge: holding a large spoon of jelly. “It was much harder than it sounds,” said Sharon.

Resident Lois Barber said: “It was great fun taking part in all the Children in Need activities. We laughed so much.

“At the same time, we’re always happy to help children who are disadvantaged as they deserve the very best of luck with their start in life.”

As well as Avon Cliff, which raised £70, there was Children in Need fun at other Colten Care homes across the South.

Laura said: “It was a long day and I was absolutely exhausted at the end but it was great fun. Colleagues kept me going with doughnuts and cake.”