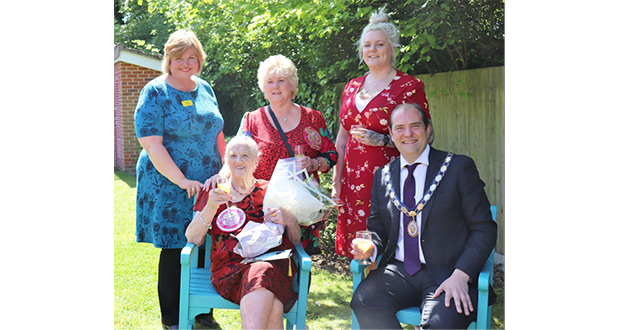 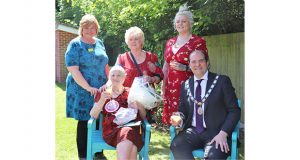 Joan Loosley, a resident at Icknield Court care home in Princes Risborough, celebrated her 100th birthday on the same day that her daughter, Pat, turned 70.

Joan’s family organised a tremendous celebratory weekend to mark her becoming a centenarian, with a visit from the Mayor to plant a tree in the gardens, a pamper treatment for Joan and her daughters from a local make-up artist and a professional photo of the whole family, including her three daughters, 12 grandchildren, 19 great grandchildren and one great great grandchild.

Children from the local school also painted pebbles in red (Joan’s favourite colour) and hid them around the local area as a special memento.

Although Joan only moved into Icknield Court in 2018, run by local care provider The Fremantle Trust, she has a lasting connection to the Trust as her daughter worked there and her great granddaughter, Lucy, is currently an activity co-ordinator at Icknield Court.

Joan has seen many changes throughout her lifetime, especially in terms of technological developments. She remembers not having the luxury of a fridge when she was younger, so instead kept milk cool under rhubarb leaves during the summer. She became a maid at the age of 14 and went on to be part of the Navy, Army and Air Force Institutes (NAAFI) in Thatcham where she worked in the cafe and looked after the soldiers.

Commenting on her birthday celebration, Joan’s great granddaughter Lucy Skidmore said: “It was such an incredible day for the whole family to join Nan to mark this milestone. We are a large, but very close family so we wanted to ensure she was made to feel very special.”

Nicola James, manager of Icknield Court added: “We were honoured to host Joan’s weekend of celebrations and were particularly thrilled to welcome the Mayor, Cllr Matthew Walsh, who presented her with her official Royal telegram. Joan is such a wonderful lady and a big part of the community here. ”