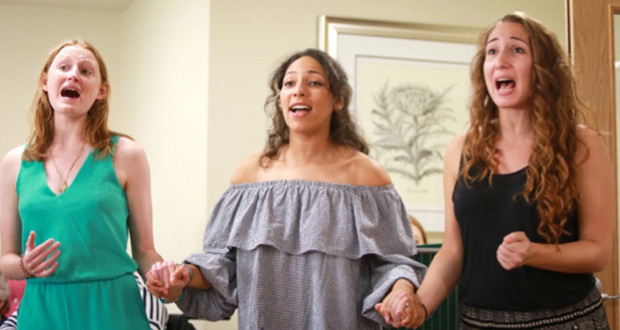 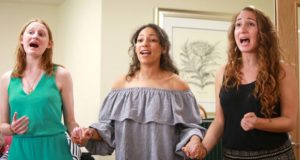 A Chichester care home was filled with the sound of music when leading cast members from the hit show Fiddler on the Roof paid a special visit.

Simbi Akande, Emma Kingston and Rose Shalloo sang ‘Matchmaker’, one of the best-known numbers from the musical which is currently playing to packed houses at Chichester Festival Theatre (CFT).

They also took part in an informal Question and Answer session with CFT’s Development Manager Will Mendelowitz before enjoying tea and cake with residents at Colten Care’s Wellington Grange.

One resident – June White – was particularly thrilled when Simbi, Rose and Emma visited her room for a one-to-one chat.

The exclusive performance at Wellington Grange was arranged under a partnership between CFT and family-owned Colten Care.

The aim of the partnership is to bring interactive theatre experiences directly into the home as well as offer residents, families and friends priority access to events and tickets at the theatre, which is less than a mile from Wellington Grange.

Subsequently the home arranged for 12 residents to see Fiddler on the Roof at three separate shows.

Emily Hudson, Activity Organiser at Wellington Grange, said: “The visit was a huge success and has been a real talking point in the home.

“Theatre has been a big part of many of our residents’ lives so it’s lovely to be able to continue the link with live performances.

“June was really chuffed when Simbi, Emma and Rose visited her room and residents who have seen the show were absolutely full of praise.”

The celebrated and much-loved musical Fiddler on the Roof opened to rave reviews on July 10 and continues with its sell-out run until September 2.

The musical stars multi award-winning comedian and actor Omid Djalili, who plays the central character Teyve, and Tracy-Ann Oberman as his wife Golde. Show-stopping songs include the hits If I Were A Rich Man, Tradition and Matchmaker.

Simbi, Emma and Rose play the roles of three of Teyve’s daughters, Tzeitel, Hodel and Chava.