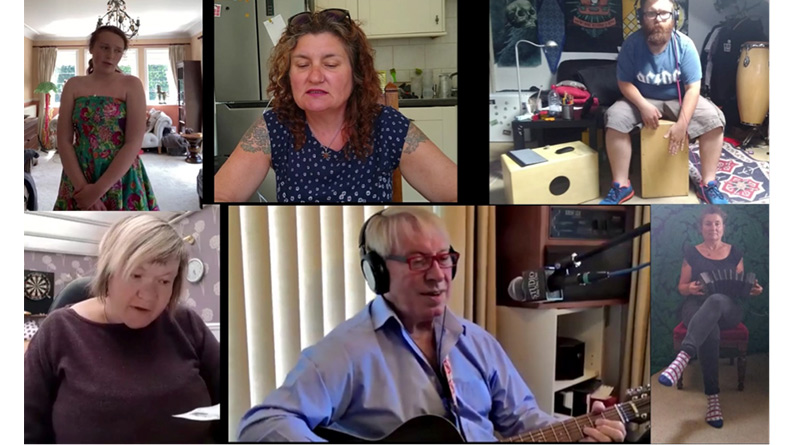 A song penned by a Yorkshire serial entrepreneur and philanthropist during lockdown has helped raise over £10k for the Carers Trust’s Emergency fund to support unpaid carers in the UK during the current pandemic. The song has also inspired a group of unpaid carers from Scarborough to do a cover version of the song to mark Carers Week, which kicked off this week (8-14 June).

Prof Graham Leslie CBE wrote his song United Together at the beginning of the lockdown with help from Hollywood composer Benson Taylor, who helped produce it, and alternative rock guitarist James Brown, from UK band Pulled Apart By Horses, who played the guitar. So far, the song has raised over £10,000, with more being pledged. The money will go towards supporting unpaid carers during the current pandemic that cannot access essential support services usually provided by a network of local carer organisations.

To mark Carers Week, which this year focuses on Making Caring Visible, carers that are supported by the Scarborough & Ryedale Carers Resource have come together to create their own cover version, having been inspired by the words of the song.

The local cover was recorded via Zoom and mobile phone, merged and produced into a well-co-ordinated collaborative piece by William Hatton-Price.  William has Mosaic Downs Syndrome and has been playing the drums since the age of three. William has been on the Action Towards inclusion project at Scarborough & Ryedale Carers Resource since October2019 and has had a variety of support including health and wellbeing and skills building to move closer to employment. He hopes to work with children in schools, and with William’s creative edge this is already becoming a reality.

Tracey Muschamp, a single mum of two daughters, also featured on the cover. All three of them have 22q deletion syndrome, a condition that is present from birth and can cause a range of lifelong problems, including heart defects and learning difficulties, and has meant they have experienced years of hospital visits and operations. Tracey is their full-time-carer.

Graham Leslie is a longstanding supporter of the Carers Trust having spent time caring for his own mother when she became ill: “This cause is really important to me as I understand how much hard work and dedication is needed to look after a loved one that requires around-the-clock care. Millions of carers across the UK work tirelessly to look after others and often with little in return, so I wanted to give something back, especially during these challenging times.”

Carers Trust is a leading UK charity that supports people of all ages who care for a family member or friend who is ill, frail, disabled or could not otherwise manage without their support.  Being an unpaid carer can be hard at the best of times, but the impact of coronavirus means that issues such as loneliness, isolation, financial hardship, or the ability to get a break from caring responsibilities have become even more challenging for carers.

Since the coronavirus outbreak:

United Together is available on over 150 worldwide music platforms including Bandcamp, Spotify, You Tube, and iTunes. To access the song, go to www.grahamleslie.co.uk/united-together. The Scarborough & Ryedale Carers Resource cover version can also be found here.