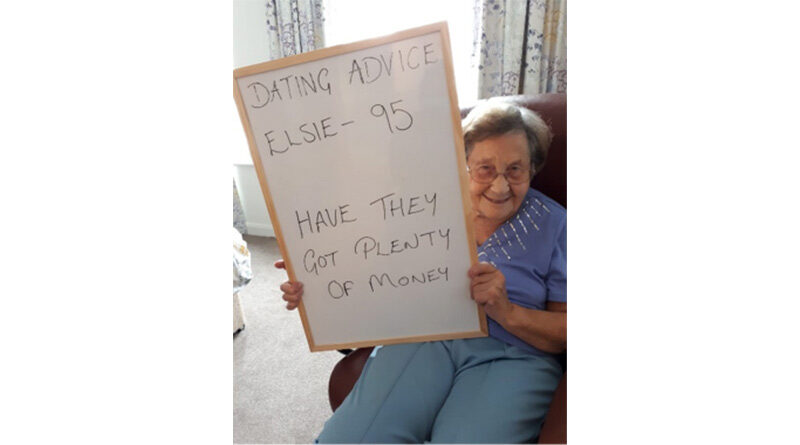 Dating advice from residents of the state-of-the-art Belong care village in Newcastle-under-Lyme has proved a surprise social media sensation.

With decades of courtship behind them, the octogenarians decided it was time to pass on a few tips from their experience to young people embarking on the search for love. With messages penned, support workers created a series of photographs showing residents holding up their words of wisdom.

The photographs, which have been posted on the care village’s Facebook page, have since been viewed by over a million people and received over 22,000 reactions, comments and shares.

Among those offering the benefit of their experience was Winnie Barnes, 89, who advised people going on a date to be mindful of their appearance: ‘make sure you look nice.’

Going to the cinema was the most popular recommendation for what to do on a first date from residents, including Brian Pugh, 84, who said: ‘Take them to watch a nice picture.’

Another resident, Ken Rawlinson, 93, advocated for leaving love to chance, counselling that finding the right person was about: ‘The right day, time and person.’

Concerned entirely with more practical matters, Elsie Price, aged 95, encouraged people to ask of prospective partners: ‘Have they got plenty of money?’

Emma Palin, experience coordinator at Newcastle-under-Lyme, said: “It was fascinating, and often humorous, to learn about love and dating from people with such life experience. I never thought it would attract such attention. With all the restrictions currently in place, we’ve had to be resourceful with finding new ways of keeping residents entertained and stimulated to be creative themselves. This was huge fun and led to hours of reminiscence – mostly of happy times, though not always!”

Not everyone at the care village was so enthusiastic about the prospect of achieving happiness through love. When asked for her thoughts on dating, Mary Booth, 86, dismissed romantic notions altogether and said: ‘Don’t bother.’